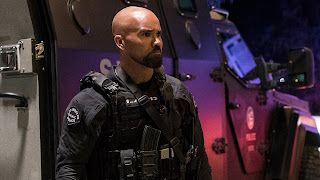 Yet another cop series, but this one started with some promise. Yes, it's a remake of the 1975 series of the same name by Robert Hamner. Adapted by Aaron Rahsaan Thomas (CSI: NY) and Shawn Ryan (The Shield), it felt like this show might be a critique of the police and its use of Special Weapons and Tactics, aka SWAT. It's set in present-day Los Angeles and within the LAPD, a police department with a corrupt history. The opening scene here even involves the shooting of an unarmed, black kid, which indicated this show was going to tackle the Black Lives Matter Movement, a movement that has been critical of blue tactics, including the militarization of police, which SWAT essentially is. The show initially feels like it's going to lean into that movement and that examination. However, as the next two episodes have displayed, this show isn't going to examine or be critical of the institution. It's going to march forward with the belief that police militarization is a good thing and the answer to all problems is a military-style gun, often shot by a police sniper.

Shemar Moore (Criminal Minds and The Young and the Restless) stars as Daniel Harrelson aka Hondo, a sergeant in SWAT in his late 40's but due to his training in a boxing gym looks like he has the muscular body of someone in his 20's. Yet, his age and experience are crucial because he's also a black man raised on the streets of Los Angeles. He knows the people in the streets but he's a cop through-and-through. It's assumed he'll be conflicted, having a foot in both worlds. At the end of the first episode, Hondo even says to the unarmed black kid who was shot that he joined the police force to change it from within. The next two episodes, however, don't follow up with that idea. How does he plan to change it? 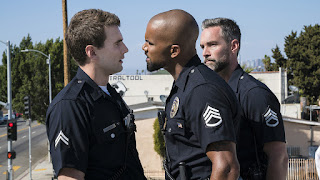 The opening credits are very similar to the opening of Hawaii Five-0. This show proceeds not unlike Hawaii Five-0 or any other CBS police procedural shows. The cops bounce from lead to lead, person to person, each scene being an excuse for them to flex their muscles and express their machismo and how they convince witnesses or persons of interest to talk by jumping in their faces and threatening verbally or otherwise. Occasionally, the cops will express some empathy or sympathy, but often it's the case that the cops have to run, punch or shoot their big guns.

Alex Russell (Only the Brave and Chronicle) co-stars as Jim Street, the new recruit to the SWAT team who is an absolute representation of that machismo. He's reckless. He acts before thinking and he's too aggressive but not violent. He simply runs into danger without much regard and he also is the kind of guy to hit on or flirt with anyone female, even while on duty. He's a bit disgusting, or just stupid, but luckily the show has him as a foil to Hondo who does berate Jim and keeps him in check.

Unfortunately, the show is preferring Jim's antics and how much of a loose canon he is, rather than digging into the institutional problems at hand or that are criticized for the most part. The show has settled into typical cop stuff. A crime happens. Cops track the criminal down and most often kill him. As such, it's boring.

Other than Hondo and Jim, the other characters in SWAT are really forgettable or inconsequential at this point. The team of cops in Ryan's most acclaimed series The Shield weren't forgettable or inconsequential. Kenny Johnson who plays Dominic Luca, a SWAT officer here, also played Detective Curtis Lemansky aka Lem in The Shield. Lem emerged as a great character several seasons into it, but that show had such distinctive and memorable characters from episode one like Dutch and Claudette, as well as Aceveda.

Stephanie Sigman (Narcos and The Bridge) also co-stars as Jessica Cortez, the captain and commanding officer of Hondo's unit. She's comparable to Aceveda in terms of her role, but, besides being the love interest for Hondo and delivering exposition, she's not distinctive or memorable or has her own characterization. At least, if she does, it doesn't stick out. Aceveda wasn't the main character in The Shield, but he was prominently featured. Jessica isn't as prominently featured. 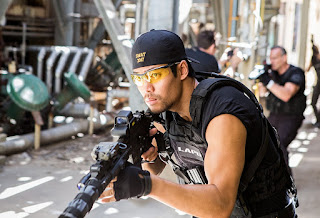 It's insane to think Ryan will ever create anything that will be as incredible as The Shield, but this series doesn't even come close. This series doesn't even come close to something like Lincoln Heights, which was  a cop show that was about a family man who had his foot in both worlds of cops and black civilians who mistrust police authority. Hondo gives lip-service to the foot-in-both-worlds idea, but the show so far has not given that conflict weight or true consequence.