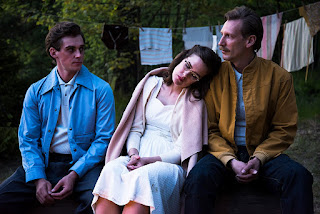 This film is the official submission from Finland to the 90th Academy Awards for Best Foreign Language Film. It tells the true story of one of the most influential figures in gay male culture, as well as a pioneering artist. This film is one of a significant number of films from foreign countries this past year directly dealing with gay male and LGBT culture, including Portugual's The Ornithologist, Iceland's Heartstone, Chile's A Fantastic Woman, Norway's Thelma, South Africa's The Wound, Ireland's Handsome Devil, England's God's Own Country and France's Paris 05:59: Théo & Hugo, as well as France's BPM (Beats Per Minute).

This Finnish biopic follows Touko Laaksonen, an illustrator and graphic designer who worked in the advertising industry. He was conscripted to serve in World War II starting in 1940. He became a second lieutenant, earning an honorary medal. After the war, he went back to advertising but privately started drawing gay male erotica. In 1956, he sold his drawings to an American magazine, which doubled as gay pornography.

Laaksonen's drawings emphasized men in uniforms, starting with German soldiers or even sailors. These uniformed men would have very muscular and chiseled features. The men would often be embraced affectionately or outright engaged in a sex act with accentuated derrieres and genitalia. Following the war, Laaksonen noticed the rise of biker culture. He particularly liked the leather outfits of guys on motorcycles. He immediately incorporated that into his drawings.

Huge beefcakes in nothing but leather eventually became a staple of his homoerotic work. These leather-men were iconic and spread through gay culture becoming supremely popular. Bars and nightclubs arose centered around Laaksonen's leather-men and started popping up all around the United States. Events like International Mr. Leather began appearing and even still exist today. 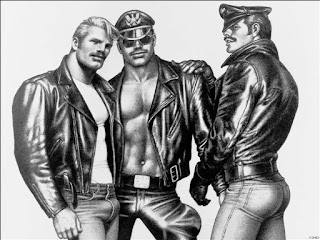 Directed by Dome Karukoski and written by Aleksi Bardy, the movie does jump around in time but in general depicts Laaksonen's journey to find a place in the world where he can be himself and express himself, as well as find an outlet to sell or show off his art. The movie also flashes back to show incidents from his life that inspired his drawings and the men he envisioned, or to whom he was attracted.

While watching, I was most reminded of The Circle (Der Kreis), a film from Switzerland that was also about a man trying to get artwork and gay literature printed and distributed. Both this movie and The Circle deal with censorship and homophobia in the publishing world in post WWII Europe. The Swiss film by Stefan Haupt was better though because it made the danger feel more real and it did a better job with the central romance.

This film has a central romance that isn't developed as well as it could have been. Pekka Strang stars as Touko Laaksonen, the gay artist who falls in love with Veli aka Nipa, played by Lauri Tilkanen. They initially meet in a park at night, both looking for anonymous sex. They later run into each other and it's clear that both are fascinated with each other's art. Veli likes Touko's drawings and Touko likes Veli's ballet dancing.

It's odd though that Touko draws all these hyper-masculine characters but yet his actual lover doesn't match his drawings. Never is that an issue in their relationship. Veli would have to be a bodybuilder who spends hours in the gym everyday to achieve the look of Touko's art. Touko himself was a pretty skinny, non-muscular guy, so it's not as if he could complain. Yet, there's never a reckoning over Touko's fantasy and what he really has, and if he's settling or just accepting the fantasy as a fantasy.

Touko does eventually go to the United States and see how popular he is there and how so many men have tried and succeeded in imitating or mimicking the look of his drawings. Touko doesn't go to San Francisco, but it would have been interesting to see him react to the Castro clone. Touko goes back home to Finland and Veli asks him about the men he met in the U.S. Veli never tried to imitate or mimick Touko's drawings, so one would assume some tension or conflict there, but this film doesn't address that. 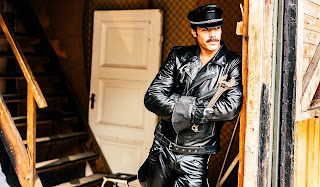 There's less drama, as it's more just a celebration of this man and his sexually, influential work, which is fine up to a point. Sadly, it overlooks a lot of issues. There is a brief scene where Touko is blamed for the AIDS/HIV epidemic. It's rather quick and doesn't take the time to unpack this issue, along with inherent body image issues.

Along with a lot of magazines today and comic books, the male image portrayed by Laaksonen is an unrealistic one. It forces men to believe that being a bodybuilder is the only way to be attractive and being uber-masculine is the ideal. There is a moment when Touko tells Veli that "only sissies like yellow." That moment comes back in an affirmative way. Yet, it doesn't dismiss this film's dismissal of femininity in men as an attractive aspect, but we do see drag queens in the final scene celebrating Touko, but it almost comes too little, too late.

Not Rated but for mature audiences.
Running Time: 1 hr. and 55 mins.