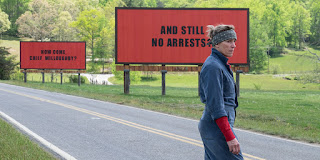 Those on the far, political right and those who watch FOX News seem to believe there is a "war on police" and people have linked that with the Black Lives Matter Movement or BLM. There is this belief on the political right that those within that movement and within the black community in general hate the police or are out to get the police. However, BLM isn't anti-police. It simply wants the police to do their job fairly or in ways that isn't in contrast to the idea of "protect and serve." Unintentionally or not, writer-director Martin McDonagh has adopted this BLM position in his protagonist here. However, BLM is mainly about direct abuses, physical abuses that threaten living black people or other minorities. This movie name-checks those abuses, but it doesn't actually address those abuses. At the same time, it criticizes the authorities for something the police have no control over.

Recently, the media has unleashed all kinds of films and TV shows that have been critical of the criminal justice system or the police. From the podcast Serial to Netflix's Making a Murderer or Ava DuVernay's 13th, we've seen so much, which demonstrate how the police can be overly zealous or prejudiced about the cases and the people they handle. This movie, however, suggests that the police don't do anything. This movie posits, besides racism, the main problem is that the police are lazy. If anything, the argument in all these other media is that the police do too much or over-step its bounds, not sit on its hands. The charge in real-life is that the police can be not apathetic but rather too aggressive, which this movie displays on an individual basis, but not so as an organization.

The movie sets up a question, which it answers in the first act. It then paints its protagonist into a corner from which she can't get out. She is then for the rest of the film nothing more than a vehicle for grief and anger that at no point are channeled into anything productive. It's not to say that she shouldn't be angry and protest, but it gets to a point where she's protesting the impossible. Yes, it's unfair and tragic, but that's life and that's what this movie misses. 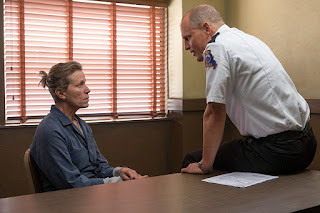 Frances McDormand (Fargo and Almost Famous) stars as Mildred Hayes, a middle-aged woman who works at a gift shop in a small town called Ebbing, Missouri. She's divorced and has two teenage children, a son and a daughter. It's revealed fairly early that Mildred's daughter, Angela, was raped and murdered. Her body was burned and ditched somewhere. This happened less than a year ago and seven months have gone by without any arrests or even suspects. Mildred is so upset that she decides to rent three billboards along a road. Each billboard is painted red with black letters that tell what happened to her daughter and asks the chief of police why there haven't been any arrests.

Woody Harrelson (The Messenger and The People vs. Larry Flynt) co-stars as Bill Willoughby, the sheriff or de facto chief of police. He's a middle-aged man who has a young wife with a horse ranch and two young daughters. Yet, he's dying of cancer. When he learns about Mildred's billboards, he calmly and rationally explains that there have been no matching fingerprints or DNA to anyone on any local or national, criminal database. There was also no witnesses or anyone who has come forward with information.

At that point, Bill asks Mildred what more should the police do. Mildred responds by saying the police should force every male in town, in the state and in the country to submit to blood tests. Bill replies that doing that would be a violation of those men's civil rights. Mildred, however, doesn't care, which is an understandable feeling, but it doesn't change reality nor does it change the U.S. Constitution. What Mildred suggests would be a violation of the Fourth Amendment.

The movie should've stopped or taken a sharp turn after that scene. Instead, it digs in its heels and its protagonist digs in her heels. Her only solution is pushing something that is literally unconstitutional and doesn't seem inclined to any other avenue. Maybe, it's because McDonagh is not an American citizen himself, so pushing an unconstitutional idea is no big deal for him, but it is a big deal to me.

There is a subplot in the film about how Mildred has to scrounge for thousands of dollars to pay to keep these billboards up for a year. At no point does she think to use that money to hire a private detective or a lawyer to sue the police department. For Mildred, it's those billboards or nothing. I understand it's a comedic conceit, but it's less funny and more just myopic and stupid. It's also odd that given the controversy the billboards spark, they're not vandalized earlier than this movie would suggest. 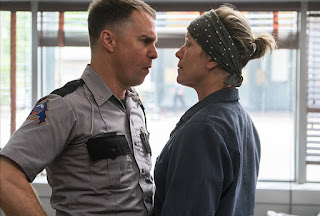 Sam Rockwell (Moon and Confessions of a Dangerous Mind)  also co-stars as Jason Dixon, an officer working under Bill Willoughby. He's a racist, lazy, mama's boy who somehow has a gun and badge. He is BLM's worst nightmare. He doesn't even hide his police brutality. He flaunts it. He is a working embodiment of it. Mildred points out several times and the movie itself points out Jason's racism or racial abuses against black people. Yet, the movie never actually depicts it. The only time we see Jason being violent is against another white person, yet the script continually hits over the head his racism, but not actually depicting it is a kind of cowardice on the filmmaker's part. I also don't understand why Jason wouldn't just ignore the whole thing. He wasn't the one called out on the billboards. We don't really hear from any of the other cops how they feel about it. Most are just ignoring it, except Jason who literally starts breaking glass and tossing people out windows for it. I didn't really get why.

McDonagh also provides no context for how we should view this titular town. Was Angela's murder an extreme case in that the town hardly ever sees murders or rapes? One would have to assume so, but maybe not. Are there other crimes that have the police busy like drugs or are they truly sitting on their hands?

If Mildred had decided to bring a lawsuit against the police department that could have forced those questions to be answered. In one scene, Milded curses a news reporter just trying to do her job. Back in 2005,  there was a real-life case of a murdered girl named Latoyia Figueroa in Philadelphia who first went missing in that summer and the police weren't doing anything about it, so people decided to use and pressure the media to help give coverage.

That real-life case was solved within a year. This is probably due to the media coverage, which went to a national level. Given the sensational nature of her daughter's death, a national outlet could have picked up Mildred's story, but the movie doesn't show Mildred even attempting anything like that. The movie simply wants to throw all this vitriol at this one particular police station, literally firebomb it without any context or true examination of policing issues. 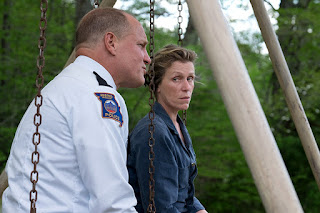 I support BLM and holding the police accountable, but this film dilutes the efforts of BLM and honest criticisms of the police, making it that much more difficult to move past rhetoric that there is some "war on police." According to a NPR report, a third of American murders will end up like the one in this movie and not be cleared, meaning there won't be an arrest. Instead of being an insightful comedy about why that is, McDonagh offers a far-fetched yarn of an over-the-top grieving mother and an equally, over-the-top racist cop.

Rated R for violence, language throughout, and some sexual references.
Running Time: 1 hr. and 55 mins.