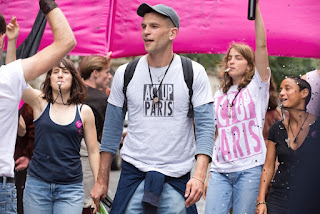 This film premiered at the 70th Cannes Film Festival in May. It was nominated for the Palme d'Or. It lost, but it did win the Queer Palm, the FIPRESCI Prize and the Grand Prize of the Jury. In September, France submitted it to the 90th Academy Awards for Best Foreign Language Film.

In October, it went into a limited theatrical release here in the United States. Directed and co-written by Robin Campillo, it draws from his personal experience with ACT UP Paris.

ACT UP is an acronym for AIDS Coalition to Unleash Power. It's an international, direct-action, advocacy group working to impact the lives of people with AIDS and HIV by bringing about legislation, medical research, treatment and policies ultimately to end the disease or find a cure. The main component to ACT UP is the direct-action part, which means its members organize physical demonstrations, which can be anything from marches, strikes, sit-ins or other forms of civil disobedience to somewhat violent assaults, such as sabotage or vandalism, anything to raise awareness.

Larry Kramer founded ACT UP in 1987 in New York City. The origins of which he detailed in his play The Normal Heart, which took 25 years to debut on Broadway where it won three Tony Awards. That play was adapted into a HBO movie in 2014 where it went on to win two Emmy Awards. Before that, the Oscar-nominated documentary How to Survive a Plague (2012) captured ACT UP in the 1980's and 90's. If one has seen those two properties, there's nothing new to be gleaned here. This movie is essentially The Normal Heart meets How to Survive a Plague but set in Paris, France.

Nahuel Pérez Biscayart stars as Sean Dalmazo, a HIV-positive member of ACT UP Paris. It's implied that he might be a founding member of that particular branch in France. If one is familiar with The Normal Heart, Sean is comparable to the character of Ned Weeks, except Ned Weeks wasn't HIV-positive. 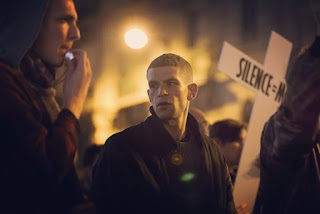 Arnaud Valois co-stars as Nathan, a HIV-negative member of ACT UP Paris. He's a bit of a newbie. He falls in love with Sean and they start dating after the group invades a school and hijacks a couple of classrooms to spread safe-sex education and promote condom use. Nathan is comparable to the character of Felix Turner in The Normal Heart, except Felix was HIV-positive.

Sean and Nathan are a very sexy couple that make sure to practice safe sex and warmly share, intimate stories about their lives. Beyond being cute and sexy, there's not much more to them. The performances from Biscayart and Valois are good and earnest, but they certainly don't compare to Joe Mantello and John Benjamin Hickey, the Broadway actors from The Normal Heart. Biscayart and Valois don't compare to Mark Ruffalo and Matt Bomer, the actors from the HBO movie. There was passion and a fire to The Normal Heart in part due to the actors that I didn't really feel here.

Sean and Nathan suffer a similar fate as Ned and Felix in The Normal Heart. When that fate is revealed, I wasn't as emotionally invested as I was in The Normal Heart. The fate was also dragged out needlessly, which resulted in an ACT UP demonstration I didn't understand and then the characters apparently moved on. The pacing of it just felt off and wrong. 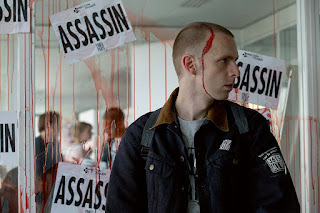 The structure of the movie is ACT UP holding meetings in what looks like a lecture hall. Rules are established as to how the meetings are run. We see the members have discussions or debates. Those debates though aren't as interesting as they could have been. The actual, direct-action demonstrations aren't super compelling. The invasion of an office building where blood is smeared comes close, but the rest of the demonstrations are shot and edited so quickly as to almost not matter.