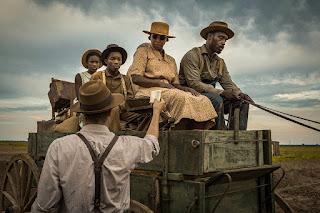 The adaptation of the 2008 novel by Hillary Jordan retains passages from the book as beautiful but somber narration. Directed and co-written by Dee Rees, visually the whole thing is beautiful but somber. As I watched this film, I was reminded of Kathryn Bigelow's Detroit, which came out this summer. Detroit spans one day in time, whereas this one spans probably a decade. Both films though follow white characters and black characters as they collide in a racially charged incident that results in bodily harm to a black man. The difference is that this film arguably has a happier ending. It's not totally happy. It's tantamount to the ending for 12 Years a Slave (2013), which was actually bittersweet. A man escapes a horror, scarred. The horror or the horrible situation still exists, but the man escapes. There is perhaps some brightness for his family, but scars both mental and physical remain, probably for the family as well.

Rees intends a balance in the storytelling between the white characters and black characters. I'm not convinced she achieves a perfect balance. The narrative still seems more weighted toward the white characters. This is more a remnant of the book, which Rees did rectify, but a faithfulness to the source material persists. There are two families here, a white one and a black one. Each has a son that is sent to serve in World War II. The movie becomes all about these two sons. At least, it wants to be all about the two sons. Unfortunately, the movie doesn't give us enough to have it be about the sons in a way that really matters or impacts as strongly as it should.

Garrett Hedlund (Tron Legacy and Four Brothers) stars as Jaime McAllan, the youngest brother to a man who inherits land, which has sharecroppers, in Mississippi. He's romantic and cultured. He knows Shakespeare. He himself wants to write plays, but he's sent into battle in World War II as a fighter pilot of B-52 bombers. 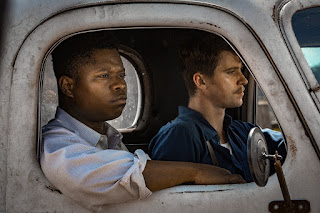 Jason Mitchell (Straight Outta Compton and Kong: Skull Island) stars as Ronsel Jackson, the eldest sibling to a bunch of brothers and sisters. His mom and dad are the sharecroppers that work on McAllan's land. He like his siblings help their parents tend to the farm. Some dream of learning to read and doing something else. Some are resigned to being farmers. The first time we see Ronsel, he's going to the army to be a tank commander in the 761st Battalion. It's not really known what his interests were prior.

Both Jamie and Ronsel experience trauma. It's what's known today as PTSD, but, given it's the 1940's, that term isn't used. Both, however, become unnerved and a little detached after seeing fellow soldiers die horribly and nearly dying themselves. Both come back to Mississippi and bond over their experiences in combat. However, the racism of that time threatens their friendship because Jamie is white and Ronsel is black, as well as threatening their lives. The issue is one that goes too racist fears explored in To Kill a Mockingbird, John Singleton's Rosewood and even this year's Marshall.

Hedlund and Mitchell give great performances, but a large chunk, if not half of this movie is not about them. The movie wants them to be an emotional center, but because the film sidelines them for so long, a bit, if not all of that emotional center is lost. The movie starts as being about Jamie's brother and Jamie's sister-in-law, as well as Ronsel's parents.

That movie about Jamie's family and Ronsel's family is an interesting one, but it is then ditched for the one involving Jamie and Ronsel. This movie essentially becomes two for the price of one. For most, that splitting of stories might be enough. It wasn't enough for me. 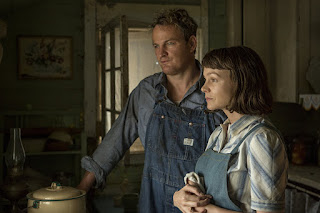 Jason Clarke (Zero Dark Thirty and Dawn of the Planet of the Apes) plays Henry, the older brother to Jamie. Carey Mulligan (An Education and The Great Gatsby) plays Laura, the wife of Henry. They're great as two people not really in their element, having left their suburban home in Memphis, and married more out of circumstance than true passion.

Rob Morgan (Stranger Things and Daredevil) plays Hap Jackson, the father to Ronsel. Mary J. Blige (Black Nativity and Betty and Coretta) plays Florence, the wife of Hap. They're also great as two people struggling for something of their own and navigating the racial dynamics. For example, the way Hap says, "Yes sir" or "No, sir," is really compelling in itself and can tell you everything that he's feeling.

A lot of praise has gone to Blige for her performance. Yet, Morgan is the real standout as far as I'm concerned. There was more of an edge-of-your-seat moment with a decision that Hap has to make rather than anyone else. I felt more connected to him than anyone else, but all the performances are very well done.