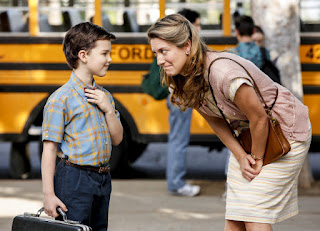 Sheldon Lee Cooper is the breakout character of CBS' The Big Bang Theory. He's portrayed in that series by Jim Parsons who has won the Emmy Award four times for this character who is a theoretical physicist at Caltech who is extremely intelligent, socially inept and rigidly logical. He has a genius level IQ but with no real sense of humor, humility or empathy. He exhibits very idiosyncratic behavior. Because the show is in its 11th season and is very profitable, CBS had no problem greenlighting a prequel series that depicts Sheldon in 1989 when at age 9 he started attending high school, skipping three grades. There was already a TV series 20 years ago that had a similar premise where a 10-year-old skips several grades and enters high school. It was called Smart Guy (1997). It starred Tahj Mowry and only ran for three seasons on the WB.

The question is why do this series? The answer is it's an easy cash grab. It's a spin-off of CBS' highest-rated show. Because it's set in the 1980's, it's also able to cash-in on the wave of 80's nostalgia that has been sweeping the Hollywood landscape for the past few years or so. Creatively, I don't know what new this show has to offer. The Big Bang Theory has been on-the-air for over a decade. It's tackled many subjects at this point. There can't be that much ground uncovered. Having adult characters, The Big Bang Theory could tackle issues like dating or work relations.

Because Sheldon is nine, dating and work-life aren't going to be explored here. One can assume school life and home life with his parents and siblings will be the ground covered with this series. That life is basically a fairly well-off, middle-class life in East Texas with a white family. Honestly, this is not what Robert Frost would call the road less traveled. There are plenty of TV shows about fairly, well-off, middle-class, white families. It's not as if this network didn't have a TV series dealing with similar dynamics and demographics. Me, Myself & I was like CBS trying to do this show and The Big Bang Theory all at once and it didn't work. 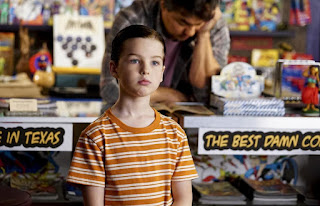 If anything, the show feels too safe, as if there's no real excitement to it and nothing really at stake. The first episode established that the series might push on social boundaries or institutions and really challenge the status quo. The show will probably continue for several seasons, so who knows where it could go, but so far, it feels like it's pulling punches and playing it safe.

For example, the second episode thrusts or rather drops an immigrant's story on us without true examination of it. The third episode sets up a possible conflict between Sheldon's atheism and his mother's Christianity. Instead of honestly exploring that conflict, it brushes it off with a lame health scare. The episode sets up a debate about facts versus faith, as well as possibility versus probability. Instead of having that debate, it drops the whole thing like a hot potato and plays a George Michael song.

The fourth episode is almost ripped from Leave It To Beaver, but there's no logic to it, nothing smart. Maybe creators Chuck Lorre and Steven Molaro are trying to say that despite being a genius, he's still a little kid with little kid problems. If so, that's undeniable, but the show shouldn't be afraid to lean into those more adult issues more aggressively. Otherwise, the show displays a timidity that's not on display in better sitcoms with more interesting child characters like Michael Evans, played by Ralph Carter in Good Times (1974). 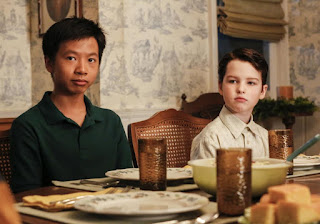 Iain Armitage who plays the titular character is adorably good. He's infinitely better in Big Little Lies on HBO earlier this year. He was also more effective a presence, even in that limited series than he is here as the lead. Zoe Perry (Scandal) who co-stars as Sheldon's mother is more the standout in this series than anyone else.