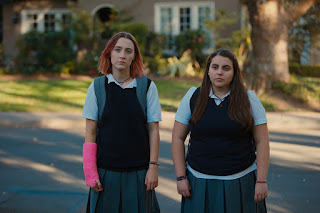 Greta Gerwig is an actress and filmmaker from Sacramento, California. She's the daughter of Christine Gerwig, an OB-GYN nurse, and Gordon Gerwig, a loan officer. She has a brother. She attended an all-girls, Catholic school. She had an interest in musical theater and ended up going to college in New York City to pursue that career. All these details are relevant because all these same details exist in this film. Greta Gerwig has written screenplays before, mainly it's been in collaboration with independent filmmakers like Joe Swanberg or Noah Baumbach, but this is her first solo effort, along with it being her solo, directorial debut. There are probably elements pulled from her adult life in her previous written works, but this is all stuff pulled from her childhood and represents a clear-eyed expression of any semi-autobiographical or even sheer biographical work that one will probably see this year.

Saoirse Ronan (Brooklyn and Atonement) stars as Christine McPherson aka Lady Bird, a 17-year-old girl who is a senior at a Catholic high school for girls. There are male, possibly non-Catholic teachers, but the principal is a nun, played by Lois Smith (Marjorie Prime and Minority Report). Lady Bird has at the top of her brain the desire to get out of her home town of Sacramento and go to the east coast, either New York City or Boston. This is unlike her adopted brother, Miguel, played by Jordan Rodrigues, who is resigned to stay in Sacramento.

She seems driven not necessarily by a hatred of Sacramento but a disappointment of it or her standing in it. Lady Bird says Sacramento has no culture, not like the cities of the northeast. It's not to say she wouldn't enjoy some place like San Francisco, which is only a hour-and-a-half away, but she would prefer an eastern city. Some of this disappointment stems from her embarrassment over her family's financial situation. 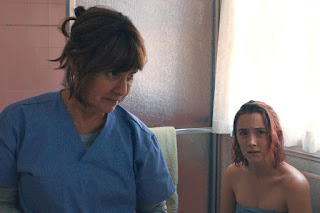 Laurie Metcalf (Getting On and Roseanne) co-stars as Marion McPherson, the mother to Lady Bird and nurse whose husband Larry, played by Tracy Letts, is out of a job but is looking for work. This makes Marion the sole breadwinner pretty much. Miguel and his girlfriend have jobs at a grocery store and probably contribute, but a lot of the burden is on Marion. She also has a bit of a contentious relationship with her daughter where Marion is very critical of Lady Bird, which leads to Lady Bird thinking her mom doesn't like her. Metcalf gives such a superb performance here and an Oscar nomination is all but assured.

Gerwig has acted in the screenplays she's written, or rather co-written, but there are a few comparisons to be made to a film in which she acted but didn't write. Last year, Gerwig was featured in Mike Mills' 20th Century Women, a film where Mills basically painted a portrait of not only Santa Barbara but also of his childhood. It's almost as if Gerwig left Mills' film and decided to do the same thing he did. Except, Gerwig's film is more effective, if only because her film is more focused. Mills was perhaps juggling too many characters and too many external elements.

Gerwig overall has a better sense of humor. This shows in her sense of editing, which is superb. She knows how to make a joke or hit a funny moment in a scene and cut away at the right time to make it punch. For those of us in the same age group as Gerwig, which I am, I also appreciated the music choices, being a child of the 90's, there is a lot that Gerwig gets right here. 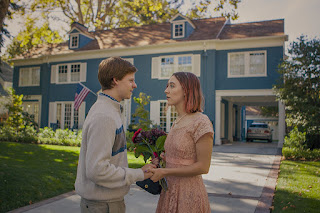 At its core, this movie is simply a coming-of-age for a teenage girl. It's not as provocative as recent teen girl coming-of-age stories like Fish Tank, Diary of a Teenage Girl, The Edge of Seventeen, Pariah, Girlhood or The Fits. Gerwig doesn't reinvent the wheel or break any new ground. Lady Bird experiences her first time having sex. She gets caught up in rival friendships and pushing against certain norms, figuring out what her beliefs are. It's all pretty standard, but Gerwig handles it all so naturally, effortlessly and authentically.