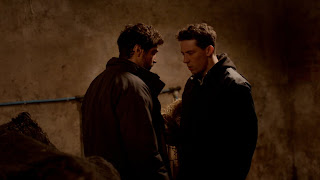 Written and directed by Francis Lee, this movie is nominated for 10 British Independent Film Awards, including Best Actor, Best Screenplay, Best Director and Best British Independent Film. I perhaps take issue with the screenplay nomination, but it's already won numerous other accolades at the Berlin International Film Festival, the Silver Q Hugo Award, the Frameline Audience Award and the Directing Award at the 2017 Sundance Film Festival. Other than Call Me By Your Name, this movie is perhaps the most acclaimed gay film of the year.

Josh O'Connor (Peaky Blinders) stars as Johnny Saxby, a 20-something farmer who has had more responsibility since his father's injury. He's mainly in charge of the cows, getting them ready so they can be sold at a nearby auction. Most, if not all his friends have gone to university. He can't go to school because he's tied to the farm. Part of him resents this and it makes him angry. Another part wants to be there for his single father who after a stroke is confined to a wheelchair. Johnny loves his father, but he gets frustrated and to relieve that frustration, he gets wasted and drunk until he's vomiting. He also has random sex with guys at the auction or the nearby pub.

Alec Secareanu co-stars as Gheorghe Ionescu, a Romanian immigrant who has come to northern England for better work. He's a farmer in his home country but the economy hasn't provided him with much income. His mom was an English teacher, so Gheorghe decides to come to the British Isles for a more profitable life. He's hired initially by Johnny's father to oversee the sheep, especially the newborn sheep. This requires him to live on the property inside a rented caravan. 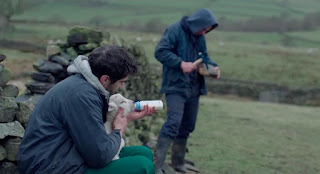 In order to oversee the sheep, Gheorghe has to take them out to pasture. Johnny is ordered to accompany, which means the two will have to camp out along the hills of England for days and possibly weeks. During this time, Johnny and Gheorghe end up falling in love. This premise is very identical to the Oscar-winning Brokeback Mountain (2005). As a matter of fact, there are some scenes and shots here that are ripped right from that lauded, Ang Lee film, so it's not just a last name that Francis Lee and Ang Lee share.

A specific shot where Johnny is sitting in the foreground and Gheorghe is in the background getting undressed and bathing himself is a direct rip-off from Brokeback Mountain. Here, however, Francis Lee has the homoeroticism turned up to a level higher than Ang Lee. Francis Lee also isn't afraid to embrace the landscape, which like Brokeback can have an idyllic, pastoral quality, but also can have a dreary and muddy aspect that's dirty and disgusting, but Francis Lee will not hesitate to have his actors roll around naked in it.

The titular location in Brokeback Mountain was meant to be an almost fantasy-land, a dream-like retreat for the two men to be together. The so-called titular location here isn't a fantasy. It's treated more realistically and more genuinely. Whereas in Brokeback the sheep were frolicking in the background like a pretty prop, here Francis Lee shows us the ugly details of animal husbandry, which includes bloody instances of vaginal violations by Johnny's hand, along with the more adorable moments of Gheorghe feeding and cuddling a cute calf.

Ian Hart also co-stars as Martin Saxby, the father to Johnny. He has a very contentious and strained relationship with his son. All of that doesn't change until his health takes a turn and he's forced to be cared for by Johnny and his mother, Dierdre, played by Gemma Jones. For a brief time, the film becomes a re-play of The Sum of Us (1995).

Like that film starring Russell Crowe, homophobia is not really the overriding issue on the table. It is, but it's even less so here. There isn't really an overriding issue, besides Johnny having to overcome some tension about the purpose to his life. Johnny as a character isn't as deep, but, arguably we don't spend as much time with him as we do Heath Ledger or even Jake Gyllenhaal's character in Brokeback Mountain. 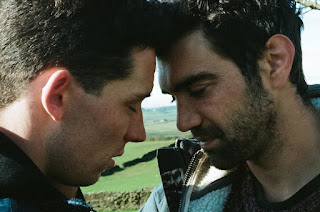 The performances from O'Connor and Secareanu are just as strong, but Francis Lee doesn't demand as much from them as Ang Lee did his actors. Yet, it's very clear that Francis Lee's characters aren't as doomed as those in that 2005 landmark film. That in itself might make this movie a bit of a landmark too. It's not any more consequential than a hundred other coming-of-age or sexual awakening films, but it provides its gay characters with a happy ending.

I just wish the script had worked a little harder or been a bit more clever when the predictable break-up and the inevitable make-up occurred. It was also frustrating when Johnny did something hurtful, which causes Gheorghe to split, but their reconciliation comes without Johnny even saying, "I'm sorry" or "I apologize." He gives a heartfelt plea but never actually says the words, which was odd.