Movie Review - The Mountain Between Us 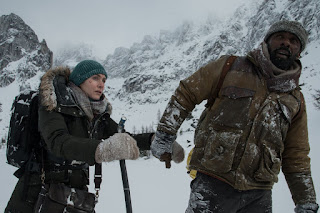 The 2011 novel was a sweeping romance of two people who fall in love while trying to survive a harrowing ordeal. Idris Elba is on the cover of Entertainment Weekly with his shirt open showing off his incredible upper body and of course his very handsome face. The black British actor has become a bit of a sex symbol and idol for cool masculinity, so much so that some have suggested he be the next James Bond. He brings all that suave and charm to this movie, as he's just the epitome of sensitivity and strength. It's no question that anyone with whom he shares the screen will fall in love with him. Unfortunately, the movie spends perhaps too much time on the survival aspects than it does reckoning with this romance, which would be totally fine, if there weren't extenuating circumstances.

Idris Elba (Beasts of No Nation and Thor) stars as Ben Bass, a doctor and neurosurgeon from London, England who lived in Baltimore and was married to an American named Sarah. Kate Winslet (Little Children and Titantic) also stars as Alex Martin, a journalist and photographer who lives in New York with her fiancé, Mark, but she works for various publications and outlets, which has her working all over the map, mainly in crisis zones.

Both are in Idaho for various reasons but need to leave immediately. When their commercial flight is cancelled, they decide to take a charter flight. However, that flight crashes into the snowy mountains of Utah, a vast wilderness where Ben and Alex are stranded for what seems like the better part of two weeks. Directed by Hany Abu-Assad, the only true interesting piece of camerawork is inside the tiny plane right before and during its crash, which seems to be done all in one, continuous take. It's appropriately claustrophobic and thrilling. 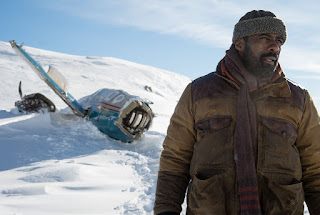 Abu-Assad spends a hour or so trying to be as enervating and as bleak as Joe Carnahan's The Grey (2011) or Alejandro G. Iñarritu's The Revenant (2015), but Abu-Assad never quite gets there. Maybe, it's because he's not trying to be as visceral or as brutal as Carnahan or Iñarritu. Abu-Assad is trying to tell a love story. The harshness of nature can't be too overwhelming as not to overshadow the time required to be sensual and alluring of his two movie stars. Except, maybe he should have accentuated that harshness because when Ben and Alex inevitably have sex, I didn't buy it.

However, I could forgive it because this movie has a potentially compelling third act that focuses on the aftermath of survival and the possible consequences of what they did. Sadly, the screenplay by Chris Weitz and J. Mills Goodloe doesn't dig into that aftermath and consequences with any depth or nuance that when it builds to its final moment, I didn't buy that either.

The movie simply has no interest in examining the relationship between Ben and Alex, the why or how they fell in love. At one point, in the final scene specifically, Alex wonders if their love is real, but the film ends a few seconds later, so there's no time to explore that question. 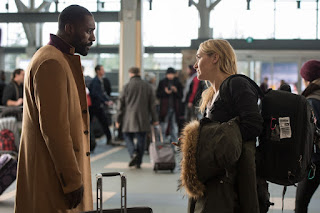 There could be several things going on here. So many people fall in love as a result of enduring and surviving a life-and-death situation. Neither are married, but Alex has a fiancé and Ben is a widow. Ben isn't cheating on anyone, but Alex is. Does she think she'll die, so she can have sex with Ben without guilt? Or, does she realize that there's something specifically about Ben that she wants that Mark, played by Dermot Mulroney (The Grey and My Best Friend's Wedding), doesn't have? Winslet and Mulroney aren't given much to establish their characters' dynamic, so we don't know why she doesn't love him any more or why she can't love two men. The question then becomes if she were in another plane crash with another sexy black guy who nursed her back to health, what would stop her from falling for that guy and ditching Ben just like she ditched Mark?

As far as Ben, he's dealing with so many issues regarding his wife that he could simply be suffering from transference, which is exacerbated by Ben being stranded alone with Alex. Alex is injured several times and it's Ben's job to take care of and nurse her back to health. Therefore, he could be suffering from a kind of Florence Nightingale effect. The film doesn't care about that level of introspection. It only cares about superficial things, but who could argue when those superficial things include the beauty that is Elba's shirtless torso. 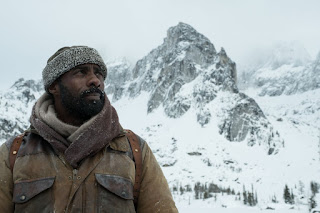