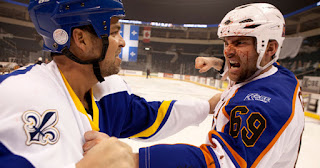 This is the sequel to the sports comedy Goon (2012). When I wrote about that film, I did so not knowing anything about ice hockey and the culture of fighting in the NHL. Fighting in the NHL is so ingrained that many fans attend games expecting to see it. With the exception of boxing and martial arts, no other sport would allow the kind of violence allowed in ice hockey. The penalty box is not a deterrence from the violence. It's a meaningless regulation. There is a debate over the fighting but the fighting itself doesn't seem to be going away. The first film felt like a parody of this issue but still a celebration of that violence. This film is a tad bit more critical but still indulges in the punching and aggressively hitting a little too much and still sees violence as the solution in the end to the film's major conflict.

Seann William Scott (American Pie and The Dukes of Hazzard) reprises his lead role of Doug Glatt, a guy who's a bit of an idiot. He's self-proclaimed as stupid. He's mainly simple-minded with no intellectual ambition. He's very sweet and has a beautiful soul, but he does have this drive or compulsion to play hockey, filling that position known as "goon" or "enforcer." In other words, he wants to fight. It's not that he enjoys hurting people. He just has this need to be the bruiser on ice.

Alison Pill (Milk and Midnight in Paris) returns as Eva, the wife of Doug and a former waitress who is now pregnant with Doug's child. She thinks because they're about to become parents, he shouldn't be the goon, meaning he shouldn't fight.

Wyatt Russell (22 Jump Street and Everybody Wants Some!!) co-stars as Anders Cain, the son of the guy who owns the Halifax Highlanders, the team for which Doug plays. However, Anders doesn't play for his father's team. Anders is the goon for an opposing team. In a game, he and Doug fight, and Anders beats the crap out of Doug. Doug isn't permanently injured but his arm is messed up so much that Doug has to stop playing. 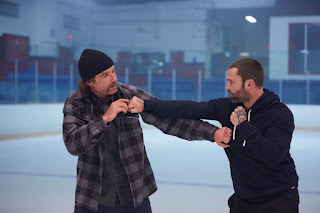 The major conflict for the rest of the movie is if Doug is going to be able to build himself back up to face Anders on the ice again. A minor conflict is if Eva will approve of him doing so. Yes, this is mostly a goofy comedy where characters mostly make literal toilet humor and penis jokes every few minutes and all the teammates are quirky and weird, ridiculously so, but there are just so many things that don't square here.

Liev Schreiber (Ray Donovan and Scream 2) also returns as Ross Rhea, a fellow goon who is much older than Doug but still likes to get bloody and bruised on the ice. It's hinted strongly that he's having health issues as a result of his fighting. One could argue that his health threats are comparable to that of a boxer or a MMA athlete, but boxing is more regulated than here where the fights on the ice look like no-holds-barred, bare-knuckle brawls that go to gory extremes turning whole chunks of the ice floor into deep colors of red.

There were two films that came out earlier this year that utilized this kind of violence in a comedy scenario. They were Fist Fight and Catfight. The first one was agenda driven. The latter was a satire. In these examples, the violence had a purpose, a greater purpose than here. This film uses the violence as nothing than just an expression of masculinity that seems there only to prove it and its power, which in the modern era and especially in the Information Age feels antiquated. 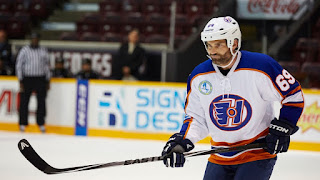 In the first film, Doug had a gay brother. There have been various stories about the NHL being welcoming of players who are openly gay. If instead of all the macho, quirky characters, the movie had included a gay hockey player and used that to challenge the old-world ideas of masculinity, that could have been interesting. The movie could have accomplished the same thing if it included a female ice hockey player onto the team. Otherwise, the movie accepts that kind of toxic masculinity and brutality as part of the game and that's no message I accept.