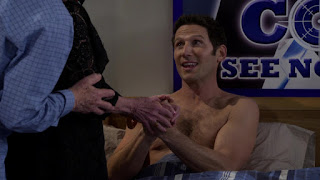 Mark Feuerstein is a great actor who has mainly worked in television for over 20 years. He's very handsome, very funny and very charming, so his role here as Josh, a former TV star who has to move from Los Angeles back home with his parents in New York City, is one that he can easily play. Josh would clarify though that he doesn't live with his parents but he lives next door to them. He also lives next door to his brother and sister-in-law. The first episode establishes that Josh moves back home because his TV show got cancelled and his wife divorced him, wiping him out financially. He now has to start his life over but has to contend with his family who keep interfering and butting into his personal affairs. His frustration and their intrusion get to be really over-the-top in the first episode. It's actually way over-the-top, which makes it all more annoying than anything else, but Feuerstein's charming performance is the only thing that saves it.

The second episode is a bit better. It sets up a weird idea that Josh isn't into one-night-stands. His brother, Andrew, played by David Walton (Masters of Sex and New Girl) who is a doctor and his sister-in-law, Eve, played by Liza Lapira (NCIS and Dexter) who's also a doctor with a child have to teach Josh how to pick up a girl with only the goal of sleeping with her and walking away, not starting a new relationship. Yet, it contradicts what happens in the first episode when Josh brings a woman home and tries to sleep with her but his family interferes and stops it. The problem in the second episode was not a problem in the first, or the first episode wasn't even acknowledged. 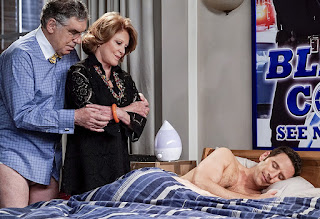 The contradiction does allow for an interesting and surprisingly romantic beat between Andrew and Eve. At the same time, it offers up extremely lame scenes for Josh's parents. Linda Lavin (Alice) plays his mom, Judy. Elliot Gould (MASH) plays his dad, Harry. The second episode really wastes their talents, but the second episode does end on a great joke for Feuerstein to play. Feuerstein is so amiable that he makes it work, giving this series potential that it otherwise wouldn't.