TV Review - Once Upon a Time: Season 7 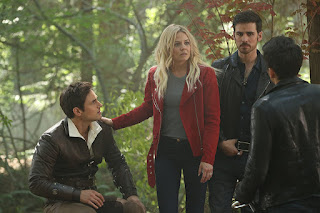 This show should have ended last season. Edward Kitsis and Adam Horowitz who created this series ran out of steam several years back but managed to keep it going by just repeating and revisiting things past the point of absurdity. Unless they were going to do a series-version of Enchanted (2007), which they never seemed willing to do, there was really no where for this show to go. For this season, which could and should be its last, it doesn't go the way of Enchanted. Kitsis and Horowitz worked on ABC's Lost, which only ran for six seasons. The structure of Lost was stolen for this series, which was fine, but they should've learned from Lost and ended after six seasons.

The big problem is that several actors from the first six seasons didn't return for this seventh season, including the protagonist and heroine, Emma Swan, played by Jennifer Morrison (House and How I Met Your Mother). The actress returned for one episode in order to explain why her character wouldn't be in this season. It was awkward because the actor who played her love interest did return full-time for this season, so Kitsis and Horowitz had to find a work-around. Because this show deals with magic, they found a work-around that didn't require having to kill off Emma Swan or split her up from her love interest. She still has a happy ending, which is the point of a lot of the Disney fairy tales. The work-around is a bit silly but it's the least of this season's problems.

The creators admit that this season is a reboot. Instead of a reboot that takes the show in a totally new direction, like the way of Enchanted, it essentially recycles the scripts from the first season and reenacts them but with different people. This season does for the series what Star Wars: The Force Awakens did for that George Lucas franchise. It is a beat-for-beat remake.

Andrew J. West (Greek and The Walking Dead) stars as Henry Mills, the son of Emma Swan, an aspiring writer in Seattle who works as a ride-share driver. He's a modern-day, taxi driver. Like Emma Swan, one day, a child knocks on his door and tells him that he has a child. The difference is the genders are swapped. Emma Swan knew she had a child. She simply gave him up for adoption. Here, Henry didn't even know his daughter existed. The premise in that regard is inherently less interesting and making Henry the protagonist of this season is logical but it's boring. 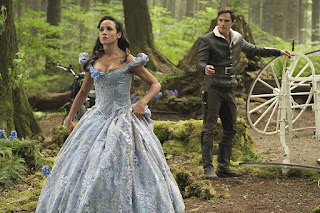 Dani Ramirez (Devious Maids and Heroes) co-stars as Cinderella, the strong female character who's supposed to fill the void left by Snow White, played by Ginnifer Goodwin. The first, two episodes don't do as well of a job of integrating her as it did Snow White early on. It's still mainly about Henry, which is extremely boring. Things change in the third episode and the tide turns toward Cinderella but she still feels like a secondary character, not as important as the others in the ensemble.

Colin O'Donaghue (The Dust Storm and The Rite) co-stars as Captain Hook, the love interest of Emma Swan who seemingly shouldn't be in this season. When Emma Swan left the show, he should have left with her, but the show finds a way to shoe-horn him into this narrative. Ever since O'Donaghue was introduced in the show's second season, he has been the sexiest thing about the series, so I get the impulse to keep him around, but his presence is pointless unless it's to be a father figure to Henry, which was his role in the previous season, but that's not his role here.

Lana Parilla (Spin City and 24) also co-stars as Regina Mills, the adopted mother to Henry, aka the Evil Queen. The previous six seasons saw her get rid of her evil side, literally, thanks to a magic spell. Her presence here makes more sense than Captain Hook, but she's sidelined for most of the first, three episodes. She was the mayor in the previous six seasons who was active in everything. Now, she's a bar-owner who is stuck behind the bar in those three episodes and it makes a vibrant and dynamic character boring.

If anything, the roles of Regina and Captain Hook should have been reversed. The narrative involves Regina, Captain Hook and Cinderella coming to Seattle, losing their memories, as was the case in the first season, but getting regular identities. Here, Regina is a glorified bartender. Captain Hook is a police detective. They should be swapped. Regina should be the police detective. 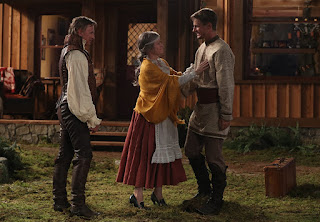 Robert Carlyle (Trainspotting and The Full Monty) plays Rumplestiltskin, the grandfather to Henry who was responsible for the curse, which brought all the fairy tale characters to the real-world and took away their memories. Carlyle is a great actor, but his presence here is unnecessary as well, but likely he's behind the current dilemma.

Gabrielle Anwar (Burn Notice and The Tudors) plays Victoria Belfrey aka Lady Tremaine, the wicked stepmother to Cinderella and the season's resident villain. Whatever she's planning, it doesn't make sense so far, given the scale of it. It also doesn't make sense why she cares about getting revenge or hurting the aforementioned characters. All will probably be explained, but, currently her real estate plan feels very lame.