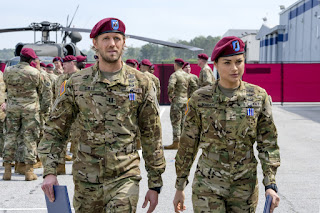 This is the third of three, new, TV shows about a team of military special forces that mainly does international missions, rescue missions. The first was NBC's The Brave, which I reviewed here. The second was CBS' SEAL Team, which I also reviewed here. Of the three, this one had the best first episode. It establishes its characters very well. It sets up an interesting scenario that doesn't really ape some of the obvious comparisons like Homeland. It feels fresher and different. It's also serialized more with a good, narrative hook. It might seem frustrating because it's targeted to a younger, more teenage demographic, but given the military is comprised of young people, it might be more appropriate, instead of aiming for those 40 and older.

Christina Ochoa (Animal Kingdom) stars as Nora Madani, a CW3 or a Chief Warrant Officer. In the army, a warrant officer is an enlisted person on active duty who specializes in one particular, technical aspect. In this case, Nora is a helicopter pilot. She's stationed at Fort Dabney, Georgia, apart of the 160th Special Operations Aviation Regiment. Her job is to fly a Black Hawk helicopter into dangerous situations, deliver Delta Force soldiers into assault or rescue missions and then lift them back out. It should be noted that it was only in 2013 that the ban on women serving in combat ended. She also has a drum kit, meaning that she's a bit of a musician. Yet, she mostly hides her drums in her closet.

Matt Barr (One Tree Hill and Hatfields & McCoys) co-stars as Leland Gallo, a captain who is the pilot-in-command for the mission in Somalia that kicks off this series. He's a tall, handsome, blonde guy who's a bit of a horn dog. He's a cocky, ladies man who's into kinky stuff. He's a good officer, but he's not totally against bending the rules whether it's to protect himself or others. He's also not against hooking up with Nora, which would be a court martial offense. Captains aren't allowed to have sexual relations with officers below them.

The mission in Somalia does kick off this series. Nora and Leland fly some Delta Force soldiers into the Golis Mountains. The soldiers rescue some CIA asset, but their helicopter gets shot down over a lake. Written by Kyle Jarrow, the series opens with this scene but then jumps ahead a month to see Nora and Leland back in the United States getting the Distinguished Flying Cross for Valor. We learn that two soldiers have been captured and are being held hostage by terrorists. The rest of the series is about how those soldiers will be saved, but there are flashbacks to how Nora and Leland got out of Somalia after the helicopter crash and the cover-up over the CIA asset. 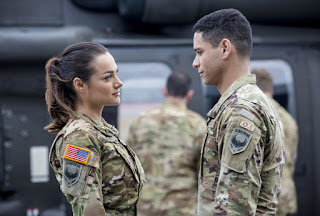 Charlie Barnett (Chicago Fire and Secrets and Lies) also co-stars as Ian Porter, a lieutenant who's also stationed at Fort Dabney. He's the boyfriend of Nora. They met when he worked for the 101st Airbourne. He now works for some intelligence agency. He cares about Nora but he knows she and Leland are hiding a secret about Somalia, and this causes tension between the two of them. It's funny because it seems like Ian will lose Nora to Leland. In other words, a black guy will lose a Spanish woman to a blonde guy, which is funny because this is the exact same thing that happened to Barnett's character in Chicago Fire.

W. Tré Davis (Shades of Blue) plays Sgt. Jimmy Kam, who was the gunner on board Nora's helicopter. Mac Brandt (Prison Break and Kingdom) plays Crank Hendrix, the other soldier held hostage in Somalia. The series follows Jimmy and Crank as they are held as prisoners and essentially tortured. Their attempts to escape fail.

Corbin Reid (How to Get Away with Murder) plays Jessica Kam, the wife of Jimmy and mother to their child. We follow her back at the Georgia base, as she deals with being an army wife who is kept in the dark because her husband's mission and status are classified. She's frustrated but she learns to accept it, as she bonds with Nora. The fact that we follow her and not Crank's family doesn't bode well for Crank's future in this series.

Emmy-winner Bryan Craig (General Hospital) plays Adam Coogan, the leader of the Delta Force team in Operation Perseus, the new mission that Nora and Leland are involved. Adam has history with Leland, meaning he lost a girl to him and he's also friends with Crank. Having to work with Leland is a new source of tension that the show will most likely wield very well. 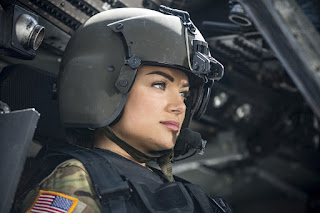 The show depicts many training exercises, which is a lot of what these soldiers do to prepare. The other series like The Brave and SEAL Team would have us believe that soldiers just bounce from mission to mission with not that much down time, which doesn't seem that realistic. The fact that this series has a woman as the main protagonist and doesn't focus on the boots on the ground but the boots in the air also makes this series more original or unique. At least, it's distinctive.