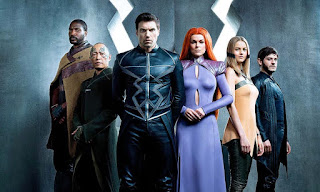 The road leading to this series is a bit strange and is worth noting. At first, it was going to be a feature film in the Marvel Cinematic Universe. The idea of Inhumans was introduced in Agents of S.H.I.E.L.D. as a way of preparing audiences and fans for the presumed blockbuster. Due to behind-the-scenes issues at Marvel Studios, the feature film instead became an eight-episode TV show. Some of the producers behind it still wanted that big-screen event, so the first, two episodes were made in conjunction with the IMAX corporation and filmed using IMAX cameras. Those two episodes were then edited into a movie and were given a limited theatrical engagement at digital IMAX theaters, the first time IMAX has been so involved with a TV series. Something similar was done with Game of Thrones but not to this extent.

Written by Scott Buck (Iron Fist), this show focuses on six characters. These six are known as the Royal Family. They're the leaders of a race of beings called Inhumans. An alien species called the Kree created the Inhumans millions of years ago. The Inhumans lived apart from primitive humans, eventually developing the ability to leave Earth and settle on the moon, but some Inhumans stayed on Earth and either intermingled with humans or kept to themselves. No explanation is given for why the Inhumans retreated to the moon and not any place farther. Yet, the city on the moon is called Attilan and it's the equivalent of Atlantis for Aquaman or Themyscira for Wonder Woman. It's a secret, protected place where these super-heroes originate.

The Inhumans are born looking human and don't have any powers. How they get their powers is through a process called terrigenesis. The process is caused when someone comes into contact with a terrigen crystal. As seen in Agents of S.H.I.E.L.D., the terrigen crystal can kill regular homo-sapiens but it transforms an Inhuman genetically, giving them some kind of super-power or deformity. Sometimes, it's both and sometimes, nothing happens. The results determine a person's social status. Inhumans who don't get super-powers are basically treated like dirt.

Iwan Rheon (Game of Thrones and Misfits) stars as Maximus, an Inhuman who didn't get any super-powers. Yet, he isn't treated like dirt. He's the exception. The reason though he's not treated like dirt or as part of the poor, working class is because Maximus is the younger brother to the most powerful Inhuman alive who is also the current king. Maximus is resentful and jealous. He wants to dethrone his brother and lead the Inhumans to Earth, which his brother doesn't want.

Anson Mount (Hell on Wheels) stars as Black Bolt, the aforementioned older brother of Maximus and the king of the Inhumans. He is also the most powerful Inhuman on the moon and possibly anywhere. The reason he's the most powerful is because he has the power to destroy an entire planet. His voice or his vocal chords are the source of his energy. If he speaks or utters a sound, it releases a strong energy blast that will annihilate anything in front of him. The strength of the blast is connected to the loudness of his voice, so if he screamed, it would obliterate everything. Therefore, he remains mute and only communicates through sign language.

While this presents some interesting moments and some dramatic tension, not being able to speak isn't the only limitation the character has. Not speaking though is a self-imposed limitation by the character himself, which is fine. However, Buck puts limitations on the character that aren't due to any reason as yet explained in the show.

In the comic books, Black Bolt can fly. He can protect himself with a force field and he's telepathic. When trouble breaks out in this TV show, he never uses any of these powers. Maximus commits treason and initiates a coup d'etat. He then tries to kill his brother and at no point does Black Bolt use any of his other abilities. When Black Bolt arrives on Earth and runs into trouble, he still doesn't use his powers. He's surrounded by cops and needs to get away. I understand him not wanting to speak and kill anyone, but he could have just flown away or used his force field. Yet, he doesn't. 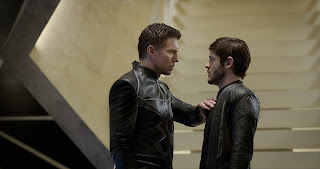 It's not just Black Bolt who's neutered. It's also the rest of his family. Serinda Swan (Graceland and Breakout Kings) co-stars as Medusa, the wife of Black Bolt. She has super-powered, red hair, which gets cut off. She also has super speed and strength, which isn't on much display here. Ken Leung (The Night Shift and Lost) also co-stars as Karnak, the cousin of Black Bolt who has the psychic power of seeing the fault in things and determining weak points. He's also a master in martial arts with great agility and reflexes. Yet, in one scene, we see him trip and fall. Isabelle Cornish plays Crystal, the sister to Medusa who can control the elements. She too can fly in the comics but we see none of that here. Finally, Eme Ikwuakor (Extant) plays Gorgon, the cousin to Black Bolt who has hooves instead of feet that can cause earthquakes. His depiction here is pretty faithful to the comics.

Yet, the rest of the Inhuman characters of the Royal Family haven't been faithfully adapted, or else they've been neutered, so what's the point? The show is doomed never to be as fun as the comics, so what is it hoping to be? It would be unfair to compare this show to the shows on Netflix, which are also apart of the Marvel Cinematic Universe, even though the Netflix shows do some neutering as well. The style and tone of the Netflix shows are just so different from this one, which looks like it wants to be bright and fun, not dark and gritty like Netflix's series.