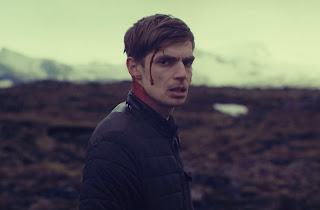 It's a horror film that is more psychological than it is visceral. Writer-director Erlingur Ottar Thoroddsen cares more about mood and atmosphere than he does plot or action. This film is more a chamber piece, and a bit of a two-hander. The majority of the screen-time is devoted to two characters alone in an isolated farm-house or cabin. Of course, their isolation only adds to the suspense as noises in the night suggest a specter or some kind of home invasion. At times, this movie feels as if it could become any number of terrors like The Strangers (2008) or any number of ghost stories like Paranormal Activity (2009), but with less found-footage as Thoroddsen adopts a more classical film style here. As it goes along, one isn't sure if the movie will be about a person losing his mind, which could devolve into something Lovecraftian like In the Mouth of Madness (1994) or something metaphorical like the recent Mother! (2017).

Thoroddsen is neither Lovecraftian or metaphorical, although there has got to be something symbolic about having a scene where a gay man literally has to hide in a closet. Yes, it's reminiscent of many horror films with similar scenes dating back to the iconic Halloween (1978). For gay men, however, being "in the closet" is an expression denoting the act of hiding one's homosexuality due to either external or internal homophobia. Nowadays, being "in the closet" represents more an emotional danger. Thoroddsen instead depicts that idea as a physical danger. Without any kind of psychoanalysis, we get a brief glance that points to a possible motivation of self-loathing. Yet, instead of Michael Myers, the film provides a similar embodiment but less parricidal and more, territorial gay-basher.

Björn Stefánsson stars as Gunnar, a man who lives in Reykjavik, the capital city of Iceland. Not much is known about him, except he's Icelandic. He's in his 30's probably and he lives with his boyfriend who appears to be younger. One night, he gets a weird call from his ex-boyfriend, which prompts him to visit a secluded cabin out in the middle of nowhere. The cabin belongs to his ex-boyfriend's parents.

Sigurður Þór Óskarsson co-stars as Einar, the ex-boyfriend in question. When Gunnar arrives, Einar isn't in the cabin. He's wearing a red jacket and sitting out on some rocks on the edge of a rift. Einar claims he called Gunnar while drunk and has no memory of why he's there. His behavior is odd, so Gunnar decides to stay with Einar. Strange things start to occur and both suspect someone might be lurking around the cabin or farm. 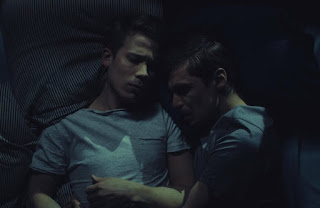 The mystery of that is a vague undercurrent here. The thrust is simply the text of these two men debating their relationship, both its past and its future. Hints are dropped as to why the two broke up and if the two will reconcile and get back together. Speaking of which, due to the Hays Code, Hollywood directors of yesteryear used interesting visual metaphors to symbolize the act of sex. I'm not too familiar with Nordic cinema but this would be the first time I've seen the Aurora Borealis as that metaphor.

While this film might not be on the level of Darren Aronofsky's recent brain-warp of a film, Mother!, its ending might require an equal level of decoding. The title itself suggests the space between the two characters or the actual fissure, the graben in the Earth where Einar is first found. Nevertheless, the odd warning of hitchhikers from a gas-station girl and the appearance of a hooded figure in the obscure edges of the frame are puzzles that scratched my head as this film rolled its credits.

Not Rated but for mature audiences.
Running Time: 1 hr. and 51 mins.

Available on DVD and VOD on November 21.