TV Review - Wisdom of the Crowd 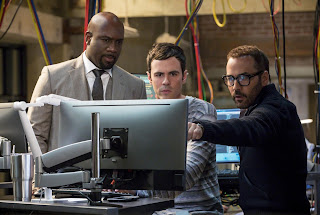 The premise to this series feels very similar to a FOX series earlier this year called APB. The basic idea was a rich, white guy, a tech billionaire, deciding he knows better than the police, so he's going to take control of a police precinct by essentially buying it, thinking he can solve crime by throwing a lot of money at it. The cornerstone of his plan is a social media app that everyone in the city of Chicago downloads, which then incorporates every user into the police work. This idea was inspired based on a news article in 2015. However, this same idea was demonstrated in the film The Circle, which also came out earlier this year but was an adaptation of a Dave Eggers novel from 2013. Technically, this series is an English remake of an Israeli TV show, but my point is simply the ideas here aren't new.

Jeremy Piven (Entourage and Ellen) stars as Jeffrey Tanner, a rich, white guy, a tech billionaire whose daughter was murdered in San Francisco. Yet, he doesn't think the man convicted is guilty, so he develops a social media app to help solve the crime. The app allows every user to feed tips or theories. It's basically crowd-sourcing police work, which in reality already is happening. Police throughout the country and world already use Facebook, Twitter and Instagram to help solve crimes. What Jeffrey does is basically centralize and privatize it.

That's the actual trick to this show and the others like it. It puts forward this idea that police work would be handled better in private hands. It says privatizing policing is better, which is the mindset of vigilantes. Some might think that's an unfair assessment of what Jeffrey and his team are doing. Some might see Jeffrey's social media app called Sophe as basically a glorified, neighborhood watch, but one that's online.

This series does make sense in a way as a reaction to so many recent TV shows that have cast doubt on the criminal justice system. Shows like Netflix's Making a Murderer, HBO's The Night Of and Netflix's The Confession Tapes, or even podcasts like Serial have collectively shown how police and prosecutors can get it wrong. Those shows have revealed how detectives and attorneys can overlook clues or even suspects, if they are over-zealous, over-confident or simply desperate to close cases for whatever reason, including political ones. This series could stand as a reaction to all of that, recognizing that someone outside the system needs to pick up the slack. 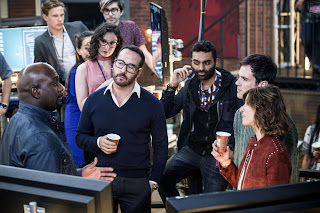 All of that could be an interesting interpretation that this series could reinforce. The problem though is that the series is rather inert dramatically and aside what's already been stated, there's nothing to it that really distinguishes it from the crowd. When I say it's inert, what I mean is the protagonist really doesn't do anything. It's much of the same issue with the protagonist in APB and in CBS' Bull. Jeffrey is like a Steve Jobs figure. He didn't really build anything. He just owns the company. It's the members of his team that does the real work. He occasionally stands in the middle and gives orders, but functionally he's not needed.

This show is a police procedural like so many on CBS and a lot of them have people at computer stations searching and investigating. When I say it doesn't distinguish itself from the crowd, that police procedural crowd, what I mean is exactly that. It's just people at computer stations, nonsensically typing. At least, in CBS' Hawaii Five-0 or NBC's Blindspot, the scenes of people at computers is broken up with cool action scenes. This series doesn't have that, so if this show is guilty of anything, it's guilty of being boring.