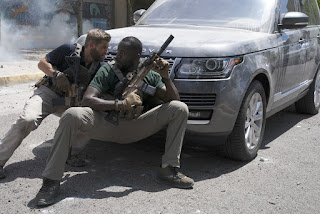 This is the first of three TV shows about a team of military special forces that mainly does international missions, rescue missions. This series involves a CIA-like aspect along with following the military action that invokes something like FOX's 24. We bounce back and forth between two teams. The first team is the people in suits in an office with computer monitors gathering intelligence electronically. The other team is the soldiers in the field with guns on the ground trying to execute whatever plan.

There are several cop shows on the air that operate in this fashion too. One in particular is on the same network as this series and it's the action show Blindspot. So far, however, this series is nowhere near as compelling or as fun. Blindspot establishes an intriguing mystery and conspiracy that really forces an examination of its characters. This series doesn't have that. It's not really serialized or inclinced to dig into its characters. It feels like it only aspires to be a weekly version of Michael Bay's 13 Hours (2016).

Mike Vogel (Under the Dome and Bates Motel) stars as Adam Dalton, a captain in the army who is currently a commander of the Special Operations Group in Turkey. He's introduced along side four other people whom are part of his team. We get a glimpse of each with a title that tells us their name, rank and position. Because there are so many characters, there really isn't enough time to get much of a sense of these people, but even in a show like Blindspot, the minor characters make more of an impression. None of the characters here make an impression, except one. 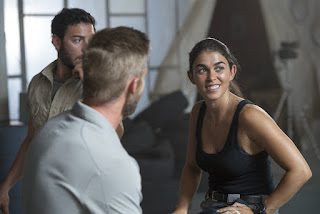 Natacha Karam co-stars as Jasmine Khan aka "Jaz," a sergeant and trained sniper from New York who's described as being like a ninja. She's the only character to make an impression in either of the first, two episodes, particularly the second, but only because she's a woman and plot-wise she has to stand out because she's the only one who can do certain things. Otherwise, she's over eager and a bad-ass who's very over-confident.

However, all the other characters blend into the background, which might work on a tactical level but on a dramatic level, it's ineffective because you don't care about any of these soldiers. Their missions have a repetitive nature in that each so far has been about a damsel-in-distress needing to be saved. That got tired after the first episode. At least in the second episode, the damsel-in-distress is a CIA operative who is highly-trained to protect herself in a war-zone.

Written by Dean Georgaris, the second episode starts by following her and the instinct is to stay with her and get to know her more, á la Three Days of the Condor (1975), but the show cuts away to depict Adam and his team basically do nothing but sit around waiting for instruction. I understand that waiting is something that's necessary and can be frustrating, but dramatically it drains this series and makes it somewhat boring. Georgaris condemns Adam and his team by calling them the "tip of the spear" and nothing else. They're just blunt instruments and that's not really compelling by itself.

Anne Heche (Hung and Men in Trees) also co-stars as Patricia Campbell, the deputy director at the Defense Intelligence Agency, a version of the CIA. She's the leader of the team of people in suits in the office with computer monitors and whatnot. Her team is comprised of two other persons, including Hannah Rivera, played by Sofia Pernas (Jane the Virgin), and Noah Morgenthau, played by Tate Ellington (Quantico). A nugget about Patricia's life is dropped but so far feels inconsequential, and nothing of consequence is learned about Hannah and Noah. Future episodes will most likely change that, but we don't get much, if any of a first impression. 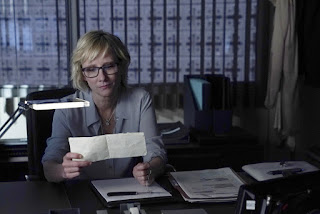 The first episode had a lot of potential because it was set up to be a take on Eye in the Sky (2015), starring Helen Mirren. Heche would have had the Mirren role, but unfortunately, Anne Heche is no Helen Mirren. The issue was a bit of debate of whether innocent casualties were worth sacrificing in the name of killing a terrorist. Eye in the Sky makes you feel the emotional stakes and the reality of that situation. Here, this show just makes it a gimmick if only to lay down track to venerate these soldiers, which is fine, but it's very boring.

The show gets points for having a diverse cast, including Demetrius Grosse (Westworld and Justified) as Ezekial Carter aka "Preach," and Hadi Tabbal as Amir Al-Raisani. Here's hoping that the series makes better use of them than just cogs in another military procedural.