Movie Review - Battle of the Sexes 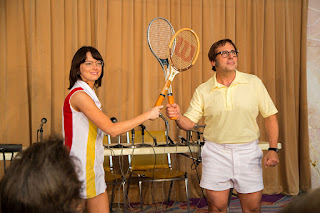 On Thursday, September 20, 1973, ABC aired in prime-time a tennis match between Billie Jean King and Bobby Riggs. King was the top-ranked tennis professional in the 60's and 70's. Riggs was the top-ranked tennis pro of the 1940's. At the time, King was 29 and Riggs was 55. This film, directed by Jonathan Dayton and Valerie Faris, the husband-wife team who made Little Miss Sunshine, recreates that match to a tee with gusto and good comedy. It also is a slice of life for both tennis players, a slight biography for both with an emphasis on issues plaguing them as they entered this spectacle.

Emma Stone (La La Land and Birdman) stars as Billie Jean King who begins as the champion of the U.S. Open. She basks in her success only for a short time. Almost immediately, she learns that female players won't be paid, in terms of prize money, equal to the men, or simply what's fair. Billie Jean is so upset that she decides to leave the tennis association, form a women's only association and advocate for equal pay. Despite occurring 45 years ago, the issue of equal pay is one that is still at odds today.

Steve Carell (The Big Short and Foxcatcher) co-stars as Bobby Riggs who isn't playing professional, just recreational but he still has a good game. Yet, he has an office job now working at his father-in-law's company, which doesn't provide him a whole lot of joy. His wife seems to be a heiress with a lot of money, more money than him. He loves his wife, but this perhaps frustrates him and pushes him to want to be more macho and aggressive. It also doesn't help that Bobby has a gambling addiction that is causing trouble within his marriage too.

Fueled by inadequacies in his relationships and his gambling addiction, Bobby decides to challenge Billie Jean to a tennis match. He sells it on the idea that it will be a "battle of the sexes" because Billie Jean was such an outspoken person for equal pay and equality of the sexes in general. It's never quite clear if Bobby is an opportunist, latching onto the issue because it was in the zeitgeist, or if he truly believes in the sexist position that men are better than women and deserve better.

Bill Pullman (Independence Day and Lost Highway) also co-stars as Jack Kramer, a former tennis pro who is running the tennis association that every player is involved. He seems to truly believe that women shouldn't have equal pay, even if the evidence is crystal-clear that they should, not that evidence is needed. Jack argues that men are naturally bigger and stronger, so that makes them better, and sadly, it's because men like Jack have so much power, influence and control that proving them wrong in a big TV event like Bobby's was important and probably necessary. 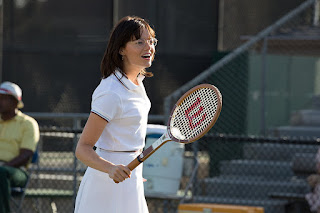 Written by Simon Beaufoy (The Full Monty and Slumdog Millionaire), the film never makes mention of the fact that the match between Bobby and Billie Jean was nowhere near a fair match. We do see that it's unfair in terms of how the two train. Billie Jean actually practices and exercises. She's on the court constantly, honing her athletic skills every hour of every day. Bobby, on the other hand, parties and goofs off. He doesn't train at all really, so when game time comes, the outcome seems obvious, even if it were two people of the same sex battling one another.

The public in this film or Billie Jean were not privy to the fact that Bobby wasn't properly training, but watching this movie, one can tell that Billie Jean's victory was only a hollow one. Yes, she beat Bobby in hard-fought sets, but she beat an opponent who was nearly 30 years older and who was out of shape.

The question that the movie doesn't address is if this fight was actually a fair one. Billie Jean was in her prime. Bobby was a bit over the hill. The movie suggests it is a fair fight when arguably it isn't. If this premise is that it's fair, is that offensive? The implication then becomes that the only way a woman can beat a man is if he's nearly twice her age and if he doesn't train at all. The movie never introduces any male tennis players who are Billie Jean's age, so the idea of all things being equal is never considered. 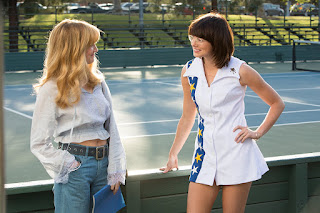 Billie Jean, in a way, does acknowledge this game is more a symbolic thing to advance the cause of feminism than a real, sports competition, a way of changing consciousness than displaying who has the better athletic ability or prowess. Nevertheless, it becomes apparent very early-on that this film, unlike The Imitation Game (2014), is more concerned with Billie Jean's romantic life than the titular match.

Andrea Riseborough (Birdman and Oblivion) co-stars as Marilyn Barnett, the Los Angeles hairdresser for whom Billie Jean falls in love and helps her to realize that she is a lesbian. She wants to pursue a relationship with Billie Jean, but it's complicated because Billie Jean is married.

He's not alone though. So many actors, despite having limited screen time, still shine in their small roles. Among them are Elisabeth Shue (Leaving Las Vegas and Back to the Future) as Priscilla Riggs, the frustrated and fed-up wife and mother. There's also Lewis Pullman, the real-life son of Bill Pullman, who plays Larry Riggs, the concerned and doubting eldest child. Jessica McNamee plays Margaret Court, the homophobic tennis rival and Natalie Morales plays Rosie Casals, the fellow tennis player and friend to Billie Jean. 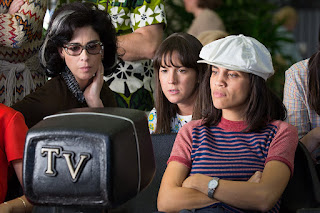 Sarah Silverman (Masters of Sex and Saturday Night Live) also co-stars as Gladys Heldman, the founder of a tennis magazine who was like an agent and manager for Billie Jean and other female players. Silverman though has a functional role, one of delivering exposition, as well as being the comic relief and it's a role she does very well. Silverman of course showboats in a way to almost counter-balance what Carell is doing, which is over-the-top but purposeful.

Dayton and Faris's direction does allow Carell enough space to flesh out this man who otherwise would just come off as a chauvinistic clown. Carell is allowed to pull back the curtain. Stone is given more than enough space as well, so much so that she tops even her Oscar-winning role in La La Land. The physical and emotional weight that Stone brings is in fact some of the best acting from anyone all year, male or female. Her scenes in particular, opposite Riseborough, are some of the most effective and sexiest stuff in a mainstream film all year too. Dayton and Faris direct a scene of Stone and Riseborough that's just a close-up of their faces and all other sounds in a noisy salon falling away. It was very titillating.

Dayton and Faris do a great job with the titular tennis match at the end of the film too. The match is depicted with intensity, thrills and believability, even if stunt doubles and CGI were employed. The filmmakers make it immersive and feel genuine. The aftermath is too just as, if not more powerful and moved me to tears.