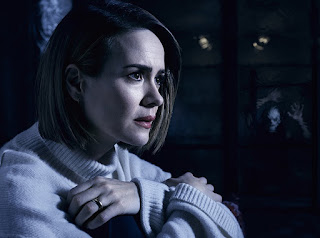 Ryan Murphy and Brad Falchuk have become provocateurs with this series than anything else. It's the Milo Yiannopoulos of TV shows. In their minds, they probably see themselves as satirists, but the ridiculousness of past seasons doesn't mesh that well with the attack of the so-called Trump era that they're attempting. When it comes to this franchise, there is no such thing as over-the-top but there are certain missteps that make the whole enterprise veer too far off track.

A couple of years ago, this series did a story about a killer clown named Twisty. For no real reason, a scene involving Twisty is injected here. It has no consequence, except to have blood and gore. In the scene, a guy pulls out a handgun in a pastoral setting and shoots Twisty multiple times to no avail. Twisty proceeds to butcher them, but it doesn't matter. There was no reason to have it. Murphy and Falchuk may make it relevant later, but it didn't in the first four episodes.

Clearly, Murphy and Falchuk want this series to be a satire of Trump's presidency and the campaign that gave rise to what Hillary Clinton called "the basket of deplorables." It's not a bad idea. Arguably, Trump's campaign was based in fear and anger, so this series wants to take that to its disgusting extreme, except not in ways that make that much sense. Yes, it plays on the fears of white liberals, but muddies the water about what the takeaway should be.

Sarah Paulson (The People Vs. O.J. Simpson and Carol) stars as Ally Mayfair-Richards, a lesbian living in Brookfield Heights, a suburban area in Michigan. She co-owns and manages a restaurant and meat processor downtown called Butchery on Main. She co-owns it with her wife, Ivy, played by Alison Pill (Midnight in Paris and Milk). Ivy is a chef. They have a son named Ozzie, played by Cooper Dodson. Ozzie is around 11 or 12.

The series begins on November 8, 2016 after Trump wins the presidency. Ally has an extreme reaction. She breaks down and cries. She goes to her therapist, Dr. Vincent, played by Cheyenne Jackson (30 Rock and Glee) who reveals that the election has triggered Ally's phobias, including coulrophobia, the fear of clowns. This is exacerbated when a series of murders starts happening in her neighborhood by people in clown masks. 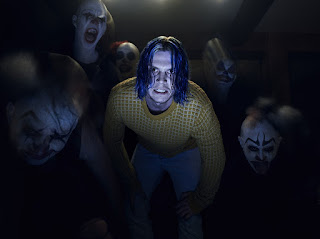 Evan Peters (X-Men: Days of Future Past and One Tree Hill) co-stars as Kai Anderson, an obvious Trump supporter who on election night colors his face orange using cheese puffs from a blender. He has blue hair and feels emboldened to spout racist ideas. He also feels inspired to run for political office himself on a platform of fear, not unlike Trump, and a lot of anti-liberal rhetoric. Even though it isn't revealed until the fourth episode, it's pretty clear that Kai is the leader of the cult of serial killers who wear the clown masks.

The rest of the series becomes not unlike FOX's The Following where it becomes about who else is a part of this clown cult. Surprisingly or not, some cult members are in the police force. Others are in the news media. Murphy and Falchuk are obviously making the statement of how some in both those institutions are complicit in Trump's rise to power, but again, the show muddies the water of what it's trying to say.

In the second episode, there is a blackout in town and everyone loses electricity. Because of the murders, Ally gets a gun for protection from her new neighbor, Harrison, played by Billy Eichner (Difficult People and Parks and Recreation). Thinking someone was in her house, she grabs the gun and tries to escape with Ozzie. Ivy was at the restaurant and sends a kitchen worker named Pedro to the house where Ally accidentally shoots him dead. 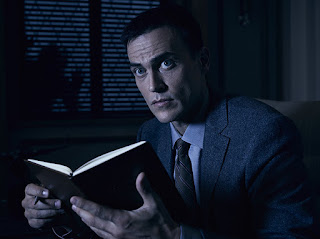 In the third episode, people protest a day or so later calling Ally the "lesbian George Zimmerman," and it's stuff like this line that muddy the water. I get that Murphy and Falchuk are playing on the fear that a lot of white liberals or white people in general have of being labeled a racist, but the circumstances are so off that again it makes no sense. George Zimmerman shot and killed an unarmed, black teenager whom Zimmerman had stalked and at first racially profiled. Ally was in her home with no electricity in pitch darkness who got spooked. The person she shot was not a black teen but a Latino. The circumstances were completely different.

The Zimmerman case, in a lot of ways, kicked off the Black Lives Matter movement. For this series to invoke that name and not have it be about a black person muddies the water. Murphy and Falchuk can dismiss this criticism as it's just about a crazy, clown cult, ginning up fear and killing people. In that, it's more effective and blunt than the recent hit film It (2017), but that doesn't make it interesting or compelling.