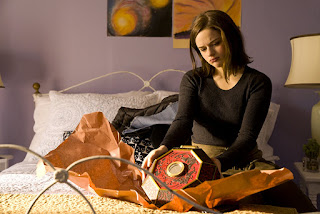 Written by Barbara Marshall, this movie is a take on The Monkey's Paw, a 1902 short story by English author W. W. Jacobs. Instead of using Arabic or Muslim mythology, this film incorporates Chinese or Asian mythology. That mythology includes a person being granted wishes that come with Hellish consequences, or as it's stated here, a "blood price." Basically, a person can get whatever they want, but someone has to die for it. The movie, however, never makes this idea as dramatically rich and compelling as it could have or should have been.

If one is familiar with the ABC series Once Upon a Time, then one knows the idea of "The Monkey's Paw" has been utilized every year for the past six years on that show. The refrain on that series is "all magic comes at a price." Typically, it's not a blood price, but most times that series made the bargain more emotional than seemingly one gets here. This movie diminishes the emotional power it could have had. Once Upon a Time really underscores the choice that characters have to make and if they can live with the consequences or pay the price. For half of this movie, the main character doesn't even know the consequences or the bargain is even happening.

Joey King (The Conjuring and White House Down) stars as Clare Shannon, a teenage girl who's mom committed suicide years ago. She now lives with her single father who collects garbage. He doesn't seem to sell it. He's a bit of a hoarder. She rides her bike everyday to school. She has two good friends, but she's somewhat bullied. She also has a crush on the hottest boy in school who already has a girlfriend.

She has issues, but her life isn't that bad. She doesn't seem that depressed or troubled. She's only slightly embarrassed at her father. Yet, her dad finds an antique box with Chinese writing on it. That writing says the owner of the box gets seven wishes but with a blood price. Clare can't understand that writing at first, so when she starts making wishes unbeknownst to her the blood price starts getting paid.

Because anyone watching this movie already knows the premise, seeing Clare running around ignorant was annoying. It also takes away some of the drama because it takes some of the blame off her. The movie might see no other way to bring her into this story. I just never believed she was desperate enough to make these wishes. Her wishes include revenge on her bully, getting the hot guy and making money. Given her circumstances, she could have called the cops on the bully, she could have hooked up with another hot guy and she didn't seem particularly materialistic, so again I don't know why she's making these wishes or I just didn't believe her motivations.

Directed by John R. Leonetti, the movie never depicts Clare and her dad as being so in need financially that the wish for money makes sense. When Clare does find out what the blood price is, her friends ask her to get rid of the music box, but she doesn't want to do so. Again, this makes no sense because her desperation had never revealed itself until then. Her materialism never revealed itself until then and all of a sudden it's over the top. 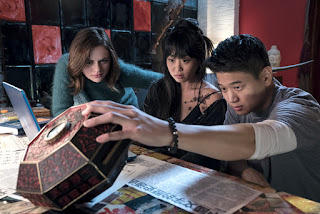 Yet, when Clare is told about the blood price, it's really late in the film. She doesn't learn until her fifth wish, which feels like the movie is spinning its wheels dramatically until then. The better part of a hour, the movie spins its wheels, which is just boring. Leonetti tries to overcome that boredom by making the death scenes as exciting as possible, but all of the deaths are either tedious or ridiculous. It's less scary and more comical.