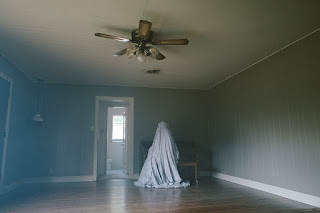 David Lowery has written and directed what could be an ode to the Oscar-winning Ghost (1990) but instead of Patrick Swayze playing the deceased, childless husband to a beautiful, young wife, it's Casey Affleck. Lowery has also come up with a gimmick. Instead of showing the actor and how he's emotionally dealing with his afterlife, Lowery has decided to put a white sheet over Affleck and have us never see him for practically the entire film. If Jerry Zucker, the director of Ghost, had decided to obscure Swayze's face and body completely, people would have revolted because Swayze was such a gorgeous man and sexy movie star. Affleck is in great shape for this film by evidence of his brief, shirtless moment where he displays a very muscular upper-body but no one would argue that Casey Affleck is a sex symbol like Swayze was. No one would argue that he's even the romantic interest that his older brother, Ben Affleck is, so putting a sheet over Casey Affleck would cause no revolts.

That being said, Lowery has crafted a gimmick film, meaning the film is all about some trick, narrative-wise or technical-wise, than it is about anything else. A lot of filmmakers will come up with some kind of gimmick, but the true power is if their film can overcome that gimmick and impart or convey something deeper or more profound. The film can also simply be a visual wonder, a physical accomplishment, which takes that gimmick to an extreme but logical conclusion. Examples include Alexander Sokurov's Russian Ark (2002) or Sebastian Schipper's Victoria (2015), which are two films all shot in one, long, continuous take, or The Umbrellas of Cherbourg (1964), which was entirely song like an opera, and Les Misérables (2012), which had all its actors singing live on set and not lip-sync.

Those films had their gimmicks, but those films made sure to really impress the screen with those gimmicks. Walking away from those films, one feels like something incredible was accomplished. That is not the feeling one has walking away from Lowery's film. One merely shrugs it off as a gimmick and not one of great import. It's certainly not the first time a well-known actor has spent nearly the whole film with his face obscured or covered. There was Hugo Weaving in V for Vendetta (2005) and Jackie Earle Haley in Watchmen (2009). This film might be notable as the first to do so with a famous actor under a sheet for nearly the entire time. Other than that, there's not much to get out of it that we couldn't entertainingly get from some other film. 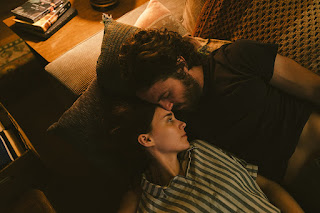 Lowery uses a 4:3 aspect ratio. There's a grainy quality to mimic 35 mm or maybe 16 mm, yet it was shot digitally. There's also a look of mostly, natural lighting. It was made almost entirely inside a Texas ranch house, simply and quietly. Basically, it's a woman alone in her house with a ghost, again just a man in a bed sheet standing and watching her do often mundane things. It's mostly boring. Even Rooney Mara (The Girl With the Dragon Tattoo and Carol) who plays the widowed woman can't jazz it up all that much.

Eventually, the film takes a turn and starts to show the future and even the past of the particular land on which the ranch house sat. I didn't really see the point of it unless the point was people have lived and died on that land and they will continue to do so without any real regard for that future or past. They'll go on rather selfishly and myopically. That, coupled with a very, nihilistic speech by Will Oldham who did the music for Lowery's last film Pete's Dragon (2016), makes this film even less attractive. Yet, if a quite somber piece fits your mood, then this film might satisfy.

The only enjoyable thing about it is a song that is featured on the soundtrack. It's in no way a happy song, but it is quite beautiful. The song is "I Get Overwhelmed" by Dark Rooms.

Available on DVD, Blu-ray and VOD.