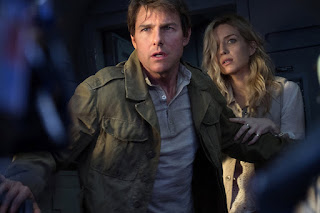 Tom Cruise stars as a soldier in Iraq who is concerned with treasure hunting and looting antiquities left over from Mesopotamia. He gets a tip from an archaeologist and he sets off with his fellow soldier to unearth whatever possible treasure might be buried. The relationships between these three seem to be vital to this film, but, the movie starts in media res, which helps to get to the action quicker but oversteps establishing characters. The movie then proceeds with not a lot of character development. Normally, this wouldn't be a problem in any other Tom Cruise movie because normally Tom Cruise is Tom Cruise, the hero, and we buy into it. Here, Cruise is not simply the outright good guy or bad-ass, so assumptions about him as an action star are inherently wrong, but the movie never really allow us the space or time to break from those assumptions. We're just launched into this movie with very little setup.

Unfortunately, this movie is no better or no more fun than the movie of the same name from nearly twenty years ago. Brendan Fraser starred in The Mummy (1999), opposite Rachel Weisz as his love interest and Arnold Vosloo as the Mummy. For starters, Fraser was only 30 when he made that movie. Cruise is 55. Even though Cruise is in great shape and looks very good for his age, his age feels like more of a factor that shouldn't have been overlooked. I'm only slightly not buying him in the role of Nick Morton, an army sergeant, but I simply had no concept of this man's life. Fraser being a young man didn't have that burden, one is better able to get a sense of him. Here, Cruise's age is a burden. The 25 years he has over Fraser should be explained.

Annabelle Wallis (Come and Find Me and Annabelle) co-stars as Jenny Halsey, the Rachel Weisz of this film, yet no where near as interesting or fun. Her character is serious, which isn't a bad thing. She just doesn't mesh with the tone that Cruise is operating and certainly not the tone of Jake Johnson (New Girl) who plays Chris Vail, a fellow soldier in the army, the sidekick and total comic relief. It's at times like Wallis and Johnson are in two completely different films. At least in 1999, Fraser, Weisz and Vosloo were all on the same page in terms of tone.

The tone seems to bounce back-and-forth between action-comedy and horror-fantasy-drama. The only time the movie balances itself is when Russell Crowe (A Beautiful Mind and Gladiator) who plays Henry Jekyll, a man who studies demonic or "evil" forces in the world, as well as supernatural occurrences, appears on screen. He seems to embody both tones effortlessly. One wishes he were in the film more, along with his alter ego, Eddie Hyde. He livens up what is pretty dull characters otherwise.

Sofia Boutella (Atomic Blonde and Star Trek Beyond) plays Ahmanet, the titular character who was an Egyptian princess who turns to the dark side and is mummified for thousands of years until Nick releases her. She's just as engaging as Vosloo was but still Vosloo felt more like a presence and a person in the story. Ahmanet, aside from the opening, feels more like a visual effect than a physical being interacting with anyone. One scene of her in bondage works fine but it's not enough.

Boutella is of Algerian descent. Hollywood has had an issue of representation, especially when it comes to stories from the Middle East. Ridley Scott's Exodus: God and Kings (2014) is a recent example of how bad it can get. Boutella is appropriate for the role. One would hope for a film about that part of the world to have more representation than what is had here. Boutella is one. Marwan Kenzari has a small role too and he's of Tunisian-descent, if only he were featured more.