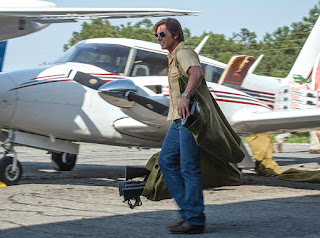 It's this year's The Wolf of Wall Street (2013). It's not as slickly directed as that Martin Scorsese film and it doesn't lean as hard on the comedy, but, in terms of depicting the rise and fall of a criminal enterprise, this movie hits a lot of the same notes and is just as entertaining with a strong central performance, trading Leonardo DiCaprio for Tom Cruise. Director Doug Liman (Edge of Tomorrow and The Bourne Identity) doesn't indulge as much as Scorsese did, mainly because Liman's film is 62 minutes shorter. Whereas Scorsese could drag things out to great effect for sure, Liman is more snappy with his pacing here, which is more appropriate given his camerawork is looser, handheld and very much akin to a documentary but not sloppy, frenetic but calculated. Liman is never trying to find a shot. He merely wants us to feel thrust into the scene, pushed as if apart of it and feeling its immediacy and often-time lunacy.

This film could also find itself guilty of the same charges of which The Wolf of Wall Street got accused. The charges are celebrating its protagonist who is a criminal, or at least not showing the damage the character was causing and only showing the fun and thrilling aspects. It's difficult to compare the two in that regard. The Wolf of Wall Street was about a corrupt stockbroker. This film is about a drugs and weapons smuggler for one of the biggest cartels on Earth. What the stockbroker did was bad but it never resulted in anyone's death. That is not the case here, which obviously makes the protagonist in this movie worse.

Tom Cruise stars as Barry Seal, a TWA pilot who uses the airline to smuggle various contraband but small scale stuff. It's hard to see Cruise in the cockpit of a plane and not think of Top Gun (1986), which is probably Cruise's signature film. Yet, this movie doesn't portray him as quite the maverick of 30 years ago. Barry comes across as bored and frustrated by his TWA job and his smuggling motives are perhaps to fulfill his thrill-seeking urges and sheer greed. 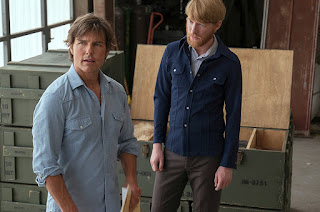 Written by Gary Spinelli, Barry is tempted with the carrot of getting to fly his own plane over dangerous countries. This movie makes it seem like Barry does it just as a way of having excitement in his life. Titles on the screen indicate he does this in 1978, quitting his TWA job to follow the orders of a young, CIA operative named Schafer, played by Domhnall Gleeson (Star Wars: The Force Awakens and The Revenant). According to Del Hahn, the former FBI agent who investigated Barry and who published a book about it last year, Barry was fired from TWA in 1974 after he was arrested for trying to smuggle explosives into Mexico.

Some reports dispute when Barry was recruited into the CIA, but clearly this film is designed more to be an indictment of the CIA and the Reagan administration than of Barry. The movie would leave us to believe that Barry was a hapless victim in a government under President Ronald Reagan that committed illegal acts leading to the Iran-Contra affair. Yes, Barry was complicit and certainly profited off the illegal acts, as well as highly enjoyed those profits, but the movie perhaps victimizes Barry in a way that might not be truthful.

As mentioned, Barry was a smuggler for one of the biggest drug cartels on Earth and for years, he was a major player in it. Barry smuggled for the Medellín Cartel, the cocaine trafficking organization based in Colombia. The group supplied coke throughout Latin America and into the United States, which is where Barry entered. Using his small pane, he figured out a way to sneak the drugs into Louisiana, avoiding U.S. Customs and Border, as well as the DEA.

When the Medellín Cartel approaches Barry, they don't really give him a choice. His plane needs gas and they put a lock on the fuel pump. They take him to a remote compound in the mountains and jungle where there are men with guns. They then reveal they know he works for the CIA. Barry seems enticed once they say how much they'll pay him, but it's debatable how much of a choice he has in that moment. He arguably could've walked away in the beginning but he let greed get the better of him, but the film feels more like Barry was caught between the CIA and the Medellín Cartel with not too many options out. 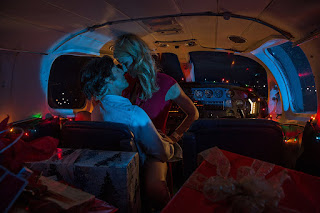 Liman does accomplish in two hours the arc that was the five seasons of Breaking Bad by way of Netflix's Narcos. The character of Barry Seal does appear in the first season of Narcos, but he's almost a throwaway and not as beloved as Liman would treat him here. Regardless, the way Breaking Bad put Walter White in tough spots and delighted in watching him figure a way out is also the way of this film in several cool scenes.

They could be called action scenes, but what Walter White is to chemistry, Barry Seal is to aviation. The flying sequences as a result become these fun and sometimes funny punctuation on the narrative. Combined with Cruise's charm and dedication to the role truly make this movie "the gringo who delivers." The supporting cast, including Sarah Wright as Barry's wife, Lucy, is weaved much similarly to that of American Hustle (2013), which shares a matching aesthetic as both are set in the same time-period. All of which makes this a compelling film and one of the year's bests.

Rated R for language throughout, some sexuality and nudity.
Running Time: 1 hr. and 57 mins.