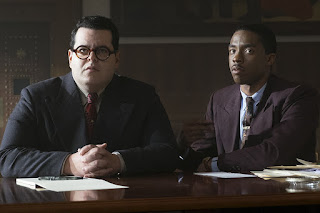 There has never been a wide-release, Hollywood film about Thurgood Marshall exclusively. Several productions on TV have explored the life of Marshall, the first African-American, U.S. Supreme Court justice and one of the most crucial figures in the Civil Rights Movement. In 1991, an ABC series starring Sidney Poitier explored the landmark case most associated with him. In 2011, a HBO movie starring Laurence Fishburne explored the majority of Marshall's career. For this film, written by Jacob Koskoff and Michael Koskoff, the decision was made not to address that landmark case or the majority of his career, which was notably arguing Supreme Court cases. Instead, the movie focuses on cases, or specifically one case that came under his work at the NAACP Legal Defense and Educational Fund, which was important for sure, but not as monumental as his Supreme Court cases.

Chadwick Boseman has made a reputation these past years of playing real-life, great African-Americans. First, he was Jackie Robinson in 42 (2013). Then, he was James Brown in Get On Up (2014). Now, he's Thurgood Marshall. It's weird though because while this character is the most influential and important to the lives of Black Americans, this character as written requires the least amount from Boseman. It certainly doesn't require the physicality of Jackie Robinson, a baseball player, or the emotional range of James Brown. This movie has Boseman really only playing one note. He was rather one-note in 42, but that movie could put his character's physicality on display.

Given that Marshall was a brilliant legal mind, this movie could have worked better, if it had put Marshall's legal mind on display. The movie has him certainly participating, but he's mostly a sidekick here. The case in question is also not one that requires a brilliant mind. The case in question is a rape case. While rape cases can involve complicated issues, this one doesn't offer anything more or different from To Kill a Mockingbird (1962). I suppose it offers a more optimistic ending, but that's about it.

The assumption is that many innocent black men were convicted of raping white women, even with less evidence, circumstantial or otherwise, than is presented here. The movie suggests that one reason those black men get convicted pre-Civil Rights Movement is due to accepting plea bargains as the only way, instead of fighting it out in court. Boseman's Thurgood Marshall equates this to black men giving up their freedom, making the link to ancestors who were slaves. It's a powerful point that was already made in Ava DuVernay's 13th, but it does provides this film with some resonance. 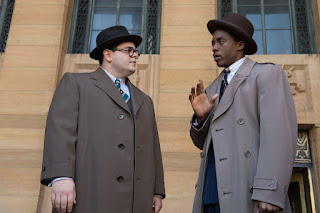 Josh Gad (Frozen and Beauty and the Beast) co-stars as Sam Friedman, a Jewish lawyer in Connecticut who is forced to assist Thurgood in the rape case. This might be the best performance from Gad that I've seen. Recent, Emmy-winner Sterling K. Brown (This Is Us and The People V. O. J. Simpson) plays Joseph Spell, the chauffeur who worked for the wealthy Strubing family who was on trial for the rape of Eleanor Strubing, played by Kate Hudson (Almost Famous and Nine). I'm not sure either Brown or Hudson are utilized all that well here.

At best, it's an okay legal drama. If the character were not named Thurgood Marshall, it would not be worth the wide-release treatment. It tries but doesn't exactly invite us into the world of its titular character. There is an awkward scene where Thurgood has dinner with Langston Hughes, played by Jussie Smollett (Empire and Alien: Covenant), and his boyfriend, August, played by Mark St. Cyr, that went nowhere. While it was appreciated to have a scene with those characters, it really felt shoe-horned into this story. Otherwise, the whole film, directed by Reginald Hudlin, was rather boring.