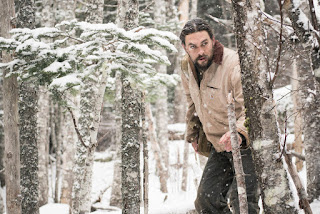 Saban Films has a slate of low-budget action flicks and this one is another to add to the pile. The majority of which are throwbacks to the kind of action flicks that were hits in theaters back in the 1980's and 90's. Written by Thomas Pa'a Sibbett, the premise is extremely flimsy and features extreme reactions or extreme decisions that seem done only to gin up the violence and the display of masculinity and muscle-flexing rather than display intelligence or reason. The point is simply to put Jason Momoa into a position where we can watch him do bad-ass things, back him into a corner and see him fight his way out.

Momoa stars as Joe Braven, a last name that could not be more on-the-nose. Joe is a logger or what's commonly known as a lumberjack. The film was shot in Newfoundland, which is along the Canadian coast, but this movie is seemingly set in the United States along the Canadian border. Joe works for a logging company deep in the mountains. Right now, it's a snow-covered forest. He's married with a daughter. He's also taking care of his elderly and widowed father who is suffering from dementia.

He and his wife, Stephanie, played by Jill Wagner (Teen Wolf and Blade: The Series), can't watch his father, Linden, played by Stephen Lang (Don't Breathe and Avatar), twenty-four hours of the day. Things get rough when Linden keeps wandering off and getting into trouble with the law. He could be practically on Alzheimer's patient. The question facing Joe is whether or not Joe should put his father in a nursing home or continue caring for his dad himself. 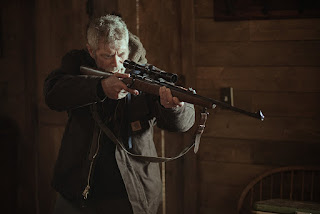 By the end, that question is never answered. It's in one glaring way settled, but only because the decision is taken away from Joe. By the end, Joe doesn't have to make that choice, a more relatable choice than the later choices he has to make in facing down violent criminals. The one relatable choice is removed, so the one, down-to-Earth, humanizing part of this character is removed. What's left is just the depiction of another super-hero role, as most action stars have to be these days, regardless if they're linked to a comic-book character or not.

In the film, Joe takes Linden to a secluded cabin deep in the woods near an ocean-side cliff. He goes there with his father to talk and make this nursing home decision. While there, they learn that a fellow lumberjack has hidden a huge stash of drugs in the cabin. The vicious drug lord named Kassen, played by Garret Dillahunt (The Mindy Project and Raising Hope), comes to get the drugs. Kassen brings a bunch of thugs with guns who lay siege on Joe and the cabin. The movie is then about how Joe and his family survive this assault.

First off, the fellow lumberjack named Weston, played by Brendan Fletcher (Freddy vs. Jason and Air Bud), is part of a drug trafficking operation where heroin is hidden in tree trunks. When the logging truck blows out a tire and is stranded on the side of the road, Weston has to hide the drugs. He decides to hide it in Joe's cabin because it's nearby, but there's also a forest in between. Why wouldn't he hide the drugs in the forest by burying it in the ground? 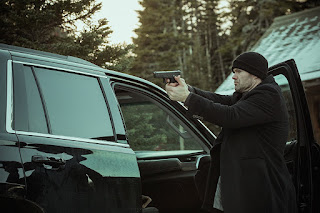 Secondly, Kassen's response is needlessly over-the-top. He brings about a half-dozen or so heavily armed men to retrieve the drugs from Joe's cabin. He escalates it to a level that was unnecessary. He could have gotten the drugs back without using the barrel of a gun or killing everyone. He didn't even have to show his face and possibly incriminate himself. He only does so because this movie wants to traffic in that kind of violence and not much else. Dillahunt has played bad guys before. He was better used in Come and Find Me (2016), another entry from Saban Films.

Thirdly, there is a moment when Joe and his family could have escaped on an ATV. The geography isn't totally clear, but he had a cell phone. He could have gotten out of the dead zone and called for help. Instead, the script has it set-up that Joe goes back because again the movie is for the violence and not much else. The movie can only end with all the bad guys dead, so that's what we have to see.

At least, this movie doesn't leave Joe's wife as just a woman at home worrying or as a simple damsel-in-distress. Stephanie becomes as much an action star as Joe or Linden. The movie does make Joe very clever in outsmarting or outmaneuvering the bad guys here, so as a slight adrenaline rush, this movie does somewhat satisfy. What it also satisfies is the requirement that every movie featuring Jason Momoa has to have him be shirtless. Like with his character in Justice League, he's even shirtless while in or near the water.