TV Review - For the People 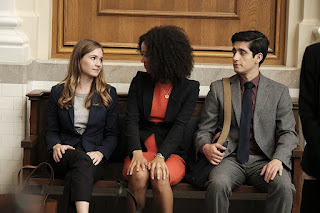 The latest show in Shondaland is a legal drama. It's a little like The Practice but for the CW crowd, or it's How To Get Away With Murder, if instead of being a serialized story that focuses on one case at a time that links the characters and pushes the dramatic edges to their extremes, all anchored by a dynamite actress, it was a topical case-of-the-week. How To Get Away With Murder has a cast of young characters still in law school under the leadership of a fierce mentor. The cast of young characters here have already graduated and are practicing attorneys. This allows those young characters to do their own things and have a myriad of separate cases. Ostensibly, each episode will feature three separate cases.

The series is set in what's called the "Mother Court," a federal court in the southern district of New York City. The series focuses on a group of lawyers who are being sworn-in as either federal public defenders or as federal prosecutors, also known as assistant U.S. attorneys or AUSAs. Specifically, it focuses on three public defenders and three AUSAs. This is seemingly to provide balance on both sides of the law. The initial thrill has one of the three public defenders go against one of the three AUSAs directly, head-to-head.

It seems though that when the two groups go head-to-head, the show seems to lean on the side of the public defenders. Even when the prosecutors win cases, the show's sympathies generally lie with the defendants. Whenever the show wants us to side with the prosecutors, they make the defendants extremely bad guys like in Episode 2, which has a doctor involved with human trafficking in a way.

The three public defenders include Sandra Bell, played by Britt Robertson (The Secret Circle and Under the Dome). She shows up early and she's probably the most eager and most optimistic about defending people. The second public defender is Allison Adams, played by Jasmin Savoy Brown (The Leftovers and Stichers), a black woman who is a bit more sensible. Sandra and Allison are friends and roommates á la Ally McBeal. There's a third defender named Jay Simmons, played by Wesam Keesh (Awkward). Jay is probably the least gung-ho and least confident. 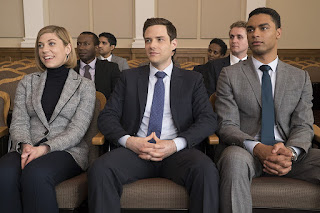 The three prosecutors include Leonard Knox, played by Regé-Jean Page (Roots and Waterloo Road). He's the cockiest and most self-assured. He's also a bit arrogant and privileged. The second prosecutor is Seth Oliver, played by Ben Rappoport (Outsourced and The Good Wife). He's the boyfriend of Allison. He enjoys his job, but he does sometimes question the tactics of his superiors because he's rather idealistic like Sandra and believes in justice, despite being on the opposite side. The third prosecutor is Kate Littlejohn, played by Susannah Flood (Chicago Fire), the most anal and antisocial of the lawyers. She's like Bonnie from How To Get Away With Murder.

At first, the show has a lot of its drama built upon the clashing personalities of the young people. The young lawyers on either side try to one-up each other and prove themselves worthy to be in the Mother Court. It's an over-exaggeration of each one wanting to be exceptional. Hope Davis (American Crime and Wayward Pines) plays Jill Carlan, the boss of the public defenders. Ben Shenkman (Angels in America and Royal Pains) plays Roger Gunn, the boss of the young prosecutors. Both Jill and Roger are there to put pressure on the young people. 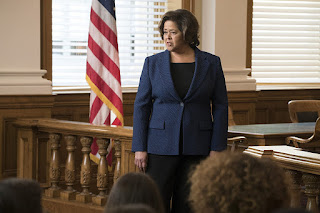 Anna Deavere Smith (Nurse Jackie and The West Wing) co-stars as Tina Krissman, the court clerk who has to wrangle the young lawyers and enforces certain rules. She's a stern taskmaster and seems there to be the counterweight to Sandra and be the realism to Sandra's idealism.

The multiple cases in one episode might be too much. The writers, however, have done a good job of developing the characters. The second episode for example provides insight into Jay and Leonard's relationships with their parents. The third episode provides insight into Allison's relationship with her brother. If the show can keep up that kind of character-work while balancing compelling cases, it could probably run as long as Law & Order.