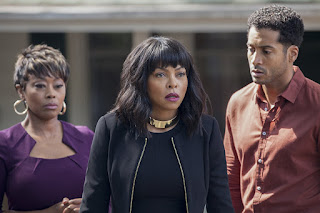 This is the 18th feature written and directed by Tyler Perry. He's written 20 features but didn't direct two of them. He churns out features as fast, if not faster than Woody Allen, and like Allen, most if not all of his films deal with similar subject matter like marriage and fidelity, even with his films that don't incorporate the Madea character, a character that is embraced for being crazy and carrying a gun in her purse, exacting revenge on people in the black community who have done her or her family wrong. Perry for the most part have limited the crazy acts to Madea who is played by Perry himself, so accusations of depicting black women with the kind of anger that he acknowledges here as a bad stereotype are accusations he mostly dodged until this film, which again acknowledges it but then doesn't circumvent it.

It's not to say that black women can't be angry on screen. If her anger is justified, then that's fine. A black woman raising her voice, standing up for herself, fighting back or pushing a strong feminist position is fine as well. It can get a little problematic when a black woman is portrayed as crazy simply for crazy's sake, which might be Perry's mistake here. Even his debut film as a writer-only, Diary of a Mad Black Woman (2005), despite its title, doesn't make the mistake of portraying its black woman as unjustifiably crazy.

Perry probably believed he was making something pulpy like the recent When the Bough Breaks (2016), which was itself an all African-American remake of Fatal Attraction (1987). However, he structures this film in a similar way as his 13th film as director, Temptation: Confessions of a Marriage Counselor (2013). He does so in a way of subverting expectations, which he accomplishes. Ironically, he does such a good job of subversion that there's hope in the film's very extended, third act that he won't succumb to those expectations. Unfortunately, he does succumb to those expectations, which only undermine what could have been a compelling message. Yet, the movie devolves into ridiculous violence that throws out all the amazing subversion that preceded. 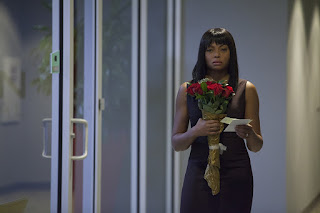 Taraji P. Henson (Hidden Figures and Hustle & Flow) stars as Melinda Moore, a woman in court-ordered therapy, following her divorce from her husband of 18 years. She's had trouble dealing with her divorce because she feels her husband used her, cheated on her and then gave the good life he promised to Melinda to someone else. There is talk of her having anger management issues, but we see only one example of that, which isn't really enough to sell that point. Now, if Perry had limited this film strictly to Melinda's point-of-view, we might be able to buy this emotional journey that Perry wants to take us on, which is supposed to show this woman spiraling into insanity.

The first hour or so is rather strictly Melinda's point-of-view, as Henson mainly narrates. The first hour of this movie is designed to make the audience hate Melinda's ex-husband. It does so with Melinda telling the therapist about how she met her husband as a teenager. Ajiona Alexus who played the younger version of Henson's character on FOX's Empire also plays the younger version of Henson's character here. Melinda accidentally meets a young college student named Robert, played as a teenager by Antonio Madison. He's tall, dark, handsome, charming and Melinda easily and naively falls for him. Henson's narration undercuts the romance. It's redundant because it's obvious to see and feel what's happening but the narrtion does add a nice dose of humor. Then, the movie takes a turn in its second hour. 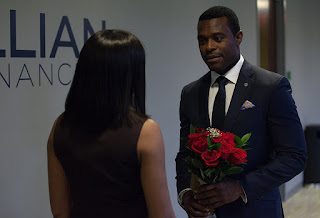 Lyriq Bent (She's Gotta Have It and The Book of Negroes) co-stars as Robert Gayle, the adult version of that college student with whom Melinda falls in love. He's an aspiring inventor who is designing a special battery that is the most environmentally friendly but he's having trouble getting investors. The movie follows him as he pursues his dream of developing this battery and then profiting off it to wealth and glory. After nearly 20 years though, nothing has happened. His pursuit of this dream has bankrupt him and his wife, as well as financially hurt his in-laws.

The final straw comes when Melinda thinks Robert is having an affair. She immediately kicks him out and divorces him. He denies it and begs her to take him back. Because he was unfaithful when they were teenagers, Melinda doesn't believe him. However, the movie switches, so that we're not locked into Melinda's point-of-view. We see the film from Robert's point-of-view and we get his perspective, so much so that arguably we begin to empathize more with Robert than Melinda. His arc is reminiscent of Will Smith's arc in The Pursuit of Happyness (2006) and just like the end of that movie, you feel for the guy.

Perry then tries to swing the pendulum the other way and have us be back in Melinda's point-of-view and be possibly on her side, but he literally goes overboard with the final few minutes of this film. It escalates to a level of violence that is nowhere near as cathartic, as when Robert literally hands Melinda a huge check of millions of dollars. Maybe, Perry didn't want Melinda to be perceived as only caring about money, but the final minutes of the movie portray her as nothing else. 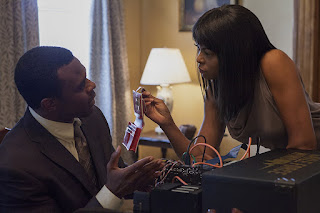 However, two-thirds to even four-fifths of this movie is really good dramatically. It isn't until the final few minutes that the movie completely falls apart. Everything from Melinda's lawsuit against Robert in that third act and onward is what deflated the film. Of course, I was enamored with all the use of Nina Simone's music, but even Nina Simone couldn't save the ending to this movie.