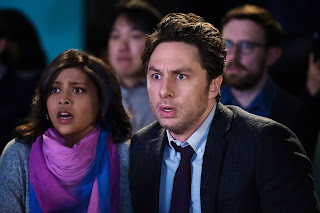 This series is quasi-biographical of Alex Blumberg who founded a podcast company in 2014 that focused on other start-ups or emerging new businesses. Written by Matt Tarses (The Goldbergs and Scrubs), the series feels like a variation on HBO's Silicon Valley. Tarses' series isn't as edgy as that HBO series and that has nothing to do with the fact that it's not on HBO. Tarses' series is by its own nature mostly a family sitcom, centering on a dad who's trying to juggle work-life and being a more involved father. What is great about Silicon Valley is how it also educates the audience on the specifics of the tech business, the specific steps and missteps of creating a company in that environment. Each episode tackles a specific issue that requires exact navigation and Mike Judge and his writers carefully and sometimes methodically navigate us through those issues.

Tarses' series doesn't have to be that methodical, but there have got to be issues with producing a podcast, monetizing it and putting together this so-called radio program for the Internet. Those issues probably aren't as intense as starting a tech company with intellectual property that's worth potentially millions, but then the question becomes why tell this story if you don't fully engage with what podcasting is or why it should matter. Without that, this becomes another lame family comedy on a network that has enough and more interesting ones. Tarses and ABC might believe that simply having a podcast company as a backdrop will make this series hip or cool, topical or relevant.

Zach Braff (Garden State and Scrubs) stars as Alex Schuman, a 37-year-old radio journalist who's married and has two children. He quits his job because all he's done is work on cheerful or fluffy stories whereas he'd rather do more hard-hitting stories like a murder case. Unfortunately, we don't see Alex exploring any stories or pursuing actual content in the first five episodes of the show. All the series has done is dabble in office politics, but half to two-thirds of the episodes is about Alex's home-life and him figuring out home-care. Given ABC has a half-dozen or so family comedies, the trappings that Tarses and his writers come up with here aren't that outstanding. 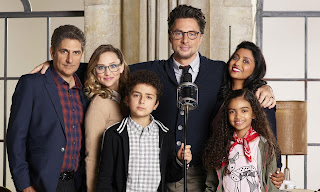 I hesitate to mention the other actors in this series because the supporting cast isn't as great as one would hope. It has nothing to do with the actors themselves. Tarses and his writers simply haven't made any person other than Braff's character that compelling. The only one who comes close is Elisha Henig who plays Ben Schuman, the young son of Alex who's half-Indian and half-awkward, as well as very precocious. Ben is 11 or 12 but he has the mind and spirit at times of someone even more mature than both his parents combined. Yet, he's still a little boy who's into magic and scared of scary movies, as well as intimidated to talk to a girl he likes.

After the fifth episode, Ben started to grow on me more than anyone else of the four or so characters who rotate around Alex. So far, those other characters are rather forgettable. It's good that Alex's wife is a woman of India heritage. She's Rooni, played by Tiya Sircar (The Good Place and Star Wars: Rebels). Otherwise, the other characters don't make much of a distinct impact. They certainly don't make as much of an impact as the supporting cast in Silicon Valley. Nor do they make as much of an impact as the supporting casts in other ABC family comedies like The Middle, Black-ish or Fresh Off the Boat.