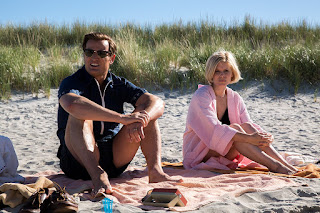 At age 30, Ted had been elected to office two years after President Kennedy's election as the 35th President of the United States and a year before that president's assassination. In 1968, his other brother, Bobby Kennedy was running for President when he too was assassinated on June 6 of that year. A year later, Ted was vacationing on Martha's Vineyard, an island off Cape Cod, in an area known as Chappaquiddick. He was participating in a sailboat race with his cousin and friend. There was a party on the night in question in which Ted invited women who worked on Bobby's campaign. 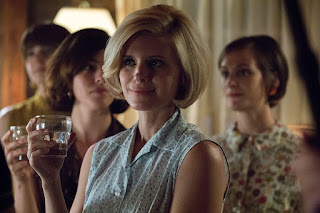 Kate Mara (The Martian and Fantastic Four) plays Mary Jo Kopechne, a political operative who worked on Bobby's campaign. She was currently working on a mayoral campaign in Jersey City, but she came up with the other women to Chappaquiddick in honor of the late Bobby Kennedy. After the party, she went with Ted for a drive, despite the fact that he had been drinking. Somehow, Ted swerved off a one-lane bridge with no guardrails, the infamous Dike Bridge, and flipped his 1967 Oldsmobile upside down into the water where Mary Jo was trapped and drowned.

In Jackie, the horrifying incident resulting in death also happened in a car. Instead of the Kenendy dying and the woman surviving, here the woman dies and the Kennedy lives. Obviously, the major difference other than gender is the fact that the surviving person is culpable in the death of the other and the whole point is showing how he avoids culpability. In that regard, this film could be considered the antithesis of Jackie, as Larraín's film did have self-preservation aspects and media manipulation, but no one walks away thinking as negatively about Jackie as one does about Ted.

Ted comes across as craven and as a man who cares more about his political career than certainly Mary Jo's life. Even if this film didn't fill in all these details, the fact that it took Ted nine hours to report the incident is all the evidence one needs. However, the rest plays like a very well done episode of Scandal or House of Cards where it's all about a politician trying to hold onto power by pulling whatever strings and engaging in whatever deception necessary. 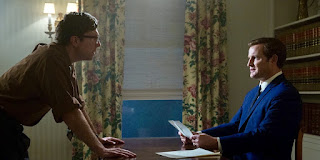 Ed Helms (The Hangover and Vacation) co-stars as Joe Gargan, the cousin and friend to Ted who knew what Ted did and kept quiet. As much as Ted is the one responsible for Mary Jo's death, there is a pretty damning reversal when Ted asks Joe why he kept quiet or why Joe didn't call the police that night. The police pulled the corpse of Mary Jo who had be left in the water for nine hours. She perhaps had an air pocket, which kept her alive for a little while during that time. Instead of being abandoned, Joe could have called the police that night and rescued her. Again, as much as Ted was responsible, this film also shows the complicity of those around him. This reflects in the way Curran chooses to shoot the film as opposed to Larraín whose camera is hyper-focused on his protagonist. Here, Curran is more open and more third-person.