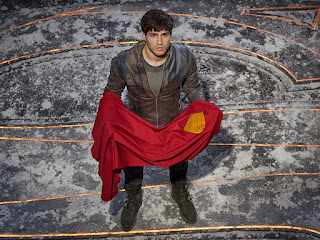 It feels weird to do a story about Superman without Superman. This series, by Ian B. Goldberg and David S. Goyer, looks too far backwards. Superman is the legendary hero from the planet of Krypton. This series wants to depict life on that planet before Superman was born. Yet, this series starts 200 years before his birth, but the question is why not 300 or 400 or 500 years. At some point, you lose track of what the point of the original character was or what he symbolized. The goal then would seem to make this series about something other than what the original character was about, but yet still use the original character as a branding or marketing tool. Goldberg and Goyer want their cake and eat it too by concocting a ridiculous time-travel story that makes Superman a character without really making him a character here, which is nothing more than a wasted opportunity.

Cameron Cuffe stars as Seg-El, the man who is the grandfather of Superman. He's living in the city of Kandor, one of the major areas on Krypton. He's 23 now but when he was 9, he witnessed the government execute his grandfather for treason or more specifically for sedition. This left Seg-El or Seg and his family without rank. Krypton seems to be ruled by a caste system or a rank system and those without rank are called rankless and are tantamount to the untouchables. Seg and his family are rankless and basically are impoverished and live in the bowels of Kandor.

Shaun Sipos (The Vampire Diaries and Melrose Place) co-stars as Adam Strange, a time traveler and an intergalactic traveler who suddenly appears on Krypton from 200 years in the future to tell Seg that an evil force is going to destroy Krypton before Superman is born, thus removing Superman from existence. As proof, Adam has Superman's cape and a crystal, which acts as a key to Seg's grandfather's fortress of solitude and his advanced technology. It's never explained how Adam knows all of this. He also gives a really lame excuse as to why Superman didn't travel back in time himself.

The CW series Supergirl incorporated the character of Superman for a few episodes. Tyler Hoechlin played Superman, so it's not as if they couldn't have brought in Hoechlin or another actor to play Superman here. Without Superman, this whole time-travel story is devoid of a personal connection that makes sense dramatically, or it feels too far removed from why we should care. It would be as if in Back to the Future (1985), Marty McFly didn't go back in time to meet his parents as kids but instead sent some random person back on his behalf.

It creates a disconnect, so that we're not able to care about Superman or his family. Aside from killing Superman's great great grandfather, it also kills Superman's great grandfather and great grandmother. Seg is the only relative that we follow. Superman's grandmother is possibly there, but she's sidelined mostly. All we have is Seg and this series really does nothing with him. The vision of Seg is an overly aggressive and overly masculine, cocky guy. He's all about brutishness and not his intellect, which is supposedly the opposite of what's in the comics.

It makes sense why Seg would be more of a brute given the direction of the rest of the series. The show actually is less concerned with Superman and his family. It's more concerned with the over militarization and the veritable police state that exists in Kandor. Goldberg and Goyer really focus on issues of military tyranny and classism. Dealing with terrorism is also a big theme here too. It's all interesting, but the individual characters just aren't enough to make us care about it. There's also some religious aspects to this, which could be interesting, but again done with characters we don't care about.

A better version of a time-travel story where people are in a trapped society on an alien world living in an underbelly, trying to fight an evil force with an impending apocalypse was just done in the fifth season of Agents of S.H.I.E.L.D. 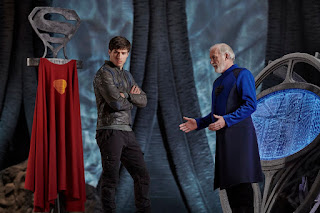 There's also a pretty lame aspect to this series as well. In the films about Superman, including Superman (1978) and Man of Steel (2013), we see technology that allows Superman to talk to a holographic projection of his family members, particularly his father, who would then explain things to him because Superman was an orphan and immigrant, cut off from his roots. Plus, because Superman wasn't a scientist, he needed those explanations. However, in the comics, Seg is supposed to be a scientist who had roots and who didn't need explanations of things, but what Goldberg and Goyer do here is make Seg a non-scientist having to stand around and get explanations from a holographic projection.

It only makes Seg who is meant to be the protagonist here less interesting. Besides contributing DNA to Superman, he doesn't do anything. He has no powers or special abilities. The pending evil force is so powerful, he's going to need help, so his role will be getting the word out and warning others, but beyond that, I don't see what he adds to this show.