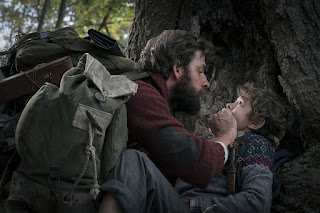 It's a monster movie and a really good thrill ride, but like with any monster movie, there is some suspension of disbelief. This movie has a bit more suspension of disbelief needed than what it should. For example, there's no explanation of where these monsters originated, how many there are or what the government response is. Yes, the monsters are fast and super-strong, but the monsters can't fly. The government can, so it seems like the Air Force would be flying around launching airstrikes at these monsters. The United States is a big country and the government wouldn't be able to deploy the Air Force everywhere all at once, so there would be pockets that would be desolate and vulnerable, which is where this movie exists, but given that the monsters here are blind and attracted to loud sounds, it seems antithetical that they would be found in quiet and desolate places like an abandoned farmhouse, which is the setting here.

Therefore, in order to enjoy this film, a lot of suspension of disbelief is required. As one watches, one will see echoes of other horror films or monster movies, from Steven Spielberg's Jurassic Park (1993) to M. Night Shyamalan's Signs (2002). Those movies did better jobs of explaining their monsters' origins and did a lot of the heavy lifting, so that audiences didn't have to do a lot of suspension of disbelief. In that way, those movies will always be better than this, also because those movies had something to say, either about life or humanity. This movie doesn't have anything particular to say, but director and co-writer John Krasinski does achieve what the best horror films achieve and that's genuine thrills and scares. On a purely visceral level, therefore, this movie works.

Speaking of Jurassic Park, this movie mimics an iconic scene with two kids trapped in a vehicle with a monster outside trying to get inside. It's as effective as that Spielberg film in how terrifying and on edge it makes you feel, and it's not simply because it's children in peril. Of course, that's unavoidable, but it's more effective than even the recent It (2017). 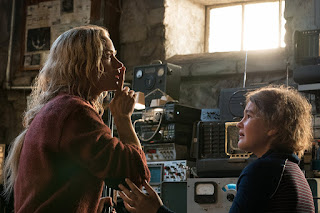 Krasinski plays a man who is married and has three children. It's 2020 and the Earth or at least the U.S. has been overrun by these monsters that are a combination of the creatures from Alien (1979) and Predator (1987). The gimmick is that they're blind. They respond to loud sounds, so the man's family has to be quiet. They can't even talk, which isn't too much trouble because his eldest child is a deaf girl, so they've all learned sign language. A car would make too much noise, so they walk everywhere and they do so barefoot, but I don't know why they couldn't wear sneakers. They retreat to an abandoned farm where they come up with a plan to survive, given that his wife, played by Krasinski's real-life wife, Emily Blunt (Edge of Tomorrow and The Devil Wears Prada), is pregnant and obviously a crying baby will pose a problem.

When it comes to a movie like this, the sound design and mixing are crucial. So much of the film is dominated with quiet or sheer silence. Every creaking floorboard becomes hyper exaggerated and a source of anxiety. With that, it's also great that the deaf girl, played by actual deaf actress Millicent Simmonds, gets to have such an integral and even heroic role by the end.