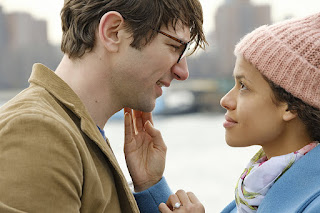 Here's the reason why this movie fails. A woman wrote the script. A woman directed it. A woman stars in it. A woman of color stars in it. Yet, the movie is all about a dorky white man. It's a cancer movie. It's a movie about someone dealing with cancer or a terminal illness. There are dozens and dozens of which, so the impulse is to try to do something different, to have a gimmick to make this one stand out from all those dozens and dozens of cancer films. The gimmick here though is so contrived but so much so as to minimize the female character. It's a gimmick that's ultimately abandoned because screenwriter Bess Wohl can't even sustain the gimmick through to a logical conclusion. It collapses rather easily on screen, which makes one wonder why even bother with the gimmick at all.

Gugu Mbatha-Raw (A Wrinkle in Time and Beyond the Lights) stars as Abigail Gordon aka Abbie, a black girl or biracial girl who meets a boy at age 8 at the aquarium. She ends up dating him as a child and they stay together into their late 20's and early 30's. They then decide to get married spurred because they think Abbie is pregnant. However, they learn instead she's dying of cancer. It seems as if she works at a book publisher, but the movie is never explicit about it. There's also not much more specific stuff about her that we learn.

Michiel Huisman (The Age of Adaline and The Invitation) co-stars as Sam, a science professor at some unnamed school in New York. He wears glasses to reinforce his nerdiness, but he's a nerd in the sense that Clark Kent is a nerd. If he takes off his glasses and takes off his shirt, it would be obvious that this guy could be a runway model or a hunk who could easily get a 100 matches on a dating app in one day. He's supposed to be awkward and make inappropriate jokes. Otherwise, he's a really nice and really sweet guy who can't tell how gorgeous he is.

Because Abbie and Sam have been monogamous to each other, Abbie gets the idea that after she dies, Sam won't be able to find another girlfriend or love interest. She decides to go behind his back and find a girlfriend for her fiancé. That's the gimmick. The dying girlfriend will find her boyfriend's next girlfriend. It's absolutely silly, silly for two reasons. One reason is obvious and the movie recognizes it. The second reason is overlooked here.

The first reason is thankfully called out. Yes, Abbie is facing a terminal illness. She will die and this movie is about how she copes with that and in many ways, a terminal patient should deal with it in whatever fashion they see fit, but even Sam calls out how insulting it is and how lowly she thinks of him that she would go to this length. The fact that she would do it isn't a criticism in itself, but the fact the movie wouldn't delve into that more is a criticism. Yes, Sam's friend, Benji, played by Brian Tyree Henry (Atlanta and This is Us), calls him a dork essentially, but Sam having glasses and telling awkward jokes isn't enough. More needed to be seeded about why Abbie would engage in this gimmick.

The second reason is one that is completely overlooked here. Director Stephanie Laing who is an Emmy-nominee for HBO's Veep doesn't see how this gimmick minimizes Abbie as a character. Abbie is so focused on finding Sam a new girlfriend that she loses sight of herself. If Abbie is terminal, her focus should understandably be on herself. With only a year or so left to live, she should be having fun and enjoying herself. If it's true that both have been monogamous, then she hasn't been with anyone else either. Isn't she curious about other guys or other experiences? Her selflessness here goes beyond the point of absurdity. It's as if she doesn't care about her own satisfaction. All she cares about is his satisfaction and well-being, which isn't as bad as the trope of the dead wife or dying wife who exists solely for the betterment of the white guy, but it's almost as bad. It's not only unrealistic but it's also quite frankly boring.