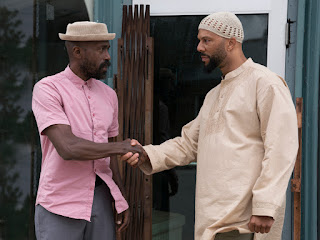 Lena Waithe made history at the 69th Primetime Emmy Awards in September of last year when she won for Outstanding Writing for a Comedy Series becoming the first black woman to do so. It was an episode of Netflix's Master of None titled "Thanksgiving," which was partially autobiographical about her experience as a queer person of color. Larry Wilmore (The Bernie Mac Show) was the first black person nominated in that category and he was also the first black person to win back at the 54th Emmys. Donald Glover (Atlanta) was the second black person to be nominated in that category and he did so last year along side Waithe, obviously losing to her. Waithe had been working in comedy since 2012, so when given her own TV series, one would assume it would be another comedy. However, this series, which she created, is more of a drama that has comedic moments, but comedy certainly isn't the driving force.

My thoughts here are based solely on seeing the first episode only, but I suppose it can be difficult to form humor out of gang violence where the victims are children, including a 16-year-old who dies unjustly. However, Waithe got Rick Famuyiwa to direct her first episode. Famuyiwa recently directed Dope (2015), a comedy that does bring humor to gang activity, including people being shot. He walked a fine line, but he pulled it off. Waithe, however, really pulls back on the comedy and I'm not sure if the series is better for it. Waithe's network is Showtime and Showtime already had a comedy set in the South Side of Chicago called Barbershop. Showtime also had a drama set in Chicago called Soul Food, so previous projects probably weren't a consideration, but of course Chicago is a big enough place that Waithe's series here could carve out its own niche. 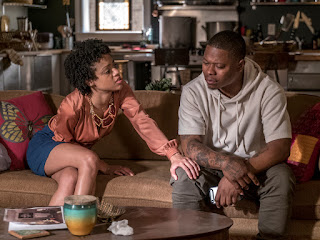 Jason Mitchell (Mudbound and Straight Outta Compton) stars as Brandon Johnson, an aspiring chef who works at a restaurant in Chicago and who hopes to have his own business one day. He lives in the South Side, the predominantly black area and the area that's frequently criticized in the media and by certain politicians and pundits as being so crime-ridden due to gang violence, particularly black-on-black murders. However, despite Brandon being smack dab in the middle of it, he's managed to rise above it and do something more positive. It doesn't mean his life isn't touched by that gang violence even in a tangential way.

Alex R. Hibbert (Moonlight and Black Panther) co-stars as Kevin Williams, a young black kid, probably 12 or 13. He has a sister who walks with him to school and who teases him as any older sister would. Kevin has a crush on a girl named Andrea. In order to be closer to her, Kevin signs up for the same school musical as her. The school is doing a production of The Wiz. Kevin is nervous about singing but the teacher encourages him to do so and his voice isn't that bad. Things change when Kevin witnesses the murder of Brandon's brother, Coogie, played by Jahking Guillory (Kicks and On the Block). 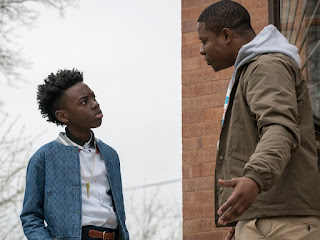 When it comes to gang activity, at the basis or root is the idea that violence begets violence and an eye for an eye, as well as not looking before leaping. Coogie's death is actually the result of someone thinking that Coogie killed someone else, so it's retribution and Kevin acknowledges this. When Brandon pushes Kevin to reveal who the murderer is, Kevin pushes back that he knows retribution will come to him and he could be the next person shot. The question then becomes what will stop the cycle of violence and what part the criminal justice system will play, if any at all.

In the wake of the Black Lives Matter movement, criticism of police shooting and killing unarmed black men was always countered with the black-on-black crimes in Chicago. It's not unlikely that the tension the black community feels with the police will come into play in this series. Nothing here will come close to what Netflix's Seven Seconds did. However, this series doesn't feel like that's its chief goal. Its chief goal appears to be to depict the life and loves of regular people in the South Side of Chicago.


Jacob Lattimore (Sleight and Collateral Beauty) also co-stars as Emmett Washington, a young black guy who is commonly referred to as a player. He's not only having sex with Kevin's sister but he's having sex with others. One of whom named Tiffany he got pregnant and managed to avoid until Tiffany drops the baby and paternity test on his front door. Actually, because Emmett lives with his mom Jada, played by Yolanda Ross (How to Get Away with Murder and The Get Down), the baby is dropped on his mom's front door. It's a moment of comedy, but Emmett having to learn to go from womanizer-to-father will probably be mined for some laughs. Yet, this series will mostly be a dramatic story about how he steps up and becomes a dad, something regular people in the black community whether in Chicago or elsewhere have to handle. 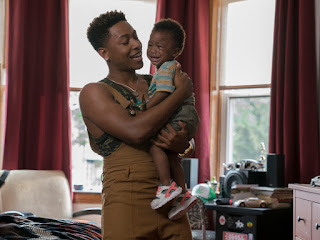 Otherwise, we have Brandon pursuing his restaurant career and we have Kevin pursuing a girl he likes and stumbling his way through musical theater. All of that has potential. Mitchell gives a devastating and heartfelt eulogy at the funeral of his character's brother. If the show continues to give great acting moments like that to its cast, then it could really be something.