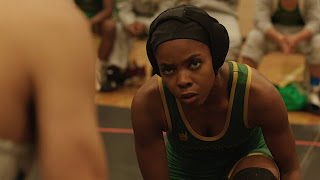 This movie gets points for exploring something that is rarely explored, an African-American female athlete. The Lifetime channel did give us The Simone Biles Story, but that was a biopic of a national and internationally recognized person. There are of course tons of black women or black girls who will never get that kind of recognition but who love sports. Simone Biles is a gymnast, which is a sport that perhaps doesn't see the type of gender discrimination as other major sports like football or other contact sports, such as wrestling, which is the sport in question here.

The last film I saw about high school wrestling was Win Win (2011). This movie, written and directed by Olivia Newman, is an adaptation of her short film of the same name in 2010, but it is a poor black girl's version of Win Win, except Newman's movie isn't a comedy, so it isn't buoyed by great comedic performances. It instead relies on the drama. That drama focuses on the relationship between the main character, a black girl and her father. This movie also gets points for exploring that, which is too rarely explored in mainstream Hollywood productions.

There are examples of stories about a black girl and her father told outside of Hollywood in independent productions that are small-scale and mostly overlooked. There have even been those in the sports genre. The one most recent that is probably the most outstanding is the documentary T-Rex (2016). That doc by Zackary Canepari and Drea Cooper is outstanding because not only does it juggle the interpersonal relationships but it also juggles socioeconomic issues as they relate to the sport she's in as a whole. It comments on the sport and puts it into somewhat of a larger context. Newman's movie here doesn't comment on the sport at all. The sport here is simply a plot device and backdrop. 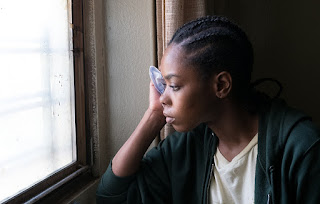 Elvire Emanuelle stars as Monique aka Mo, a teenager in Brooklyn whose mom is out of the picture and whose father is in prison. She's currently in foster care. She gets kicked out her foster mother's apartment because Mo was sleeping with her foster mother's boyfriend, a factoid that's thrown out, confirmed but then dropped. Newman is perhaps trying to underline Mo's daddy issues or her need for a father figure but in the grossest manner possible. However, Mo knows that her dad loves wrestling, so she starts participating in the sport to impress her dad when he does get out of prison.

That's why the sport here is simply a plot device. It's simply a way to connect Mo and her father, Darrel, played by Yahya Abdul-Matteen II (The Get Down). Darrel used to be a wrestler or a coach way back before he went to prison. Darrel shows not much interest in his daughter, but Mo thinks she can get his attention by impressing him with her wrestling skills, which she somehow picked up from him as well as her friend, Omari, played by Jharrel Jerome (Moonlight), but it could have been anything, any sport or any activity. There's really no specificity about wrestling here. 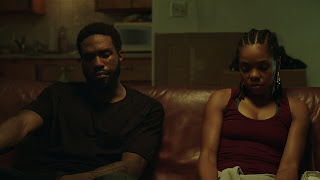 I suppose Newman made it wrestling so that the transition that Darrel wants to involve Mo in underground girl fights could be easily done. Darrel works at a Caribbean restaurant taking out garbage. He also has a second job as some kind of lot attendant. He has a dream of getting out of there, but he thinks putting his daughter in these fights, which are nothing but vicious bare-knuckle brawls, can get him money to do so. We never learn why there aren't boy fights and why Darrel himself couldn't do that. The underground girl fights exist as nothing more than proof that he's not a good father, which he all but says in his first appearance in this movie, but these fights are meant to drive it home to Mo.

Because Darrel would involve her in an illegal fight makes him a bad dad. Mo does end up with serious bruises and black eyes but that could happen if she were aspiring to be a boxer, a MMA fighter or even a football player. In fact, boys who play football are susceptible to serious injury including concussions. Boys who play basketball suffer serious injuries too. Perhaps, that's why Newman chooses wrestling, which doesn't involve hitting or as aggressive strikes, but what if Darrel were more into boxing? Yes, boxing is regulated and safety precautions are put into place but so are all the aforementioned sports and it wouldn't totally protect a person. It also doesn't change the aggressiveness involved. If I'm supposed to not like Darrel for getting Mo involved in these fights, I also must not like every parent who allows their child to do boxing or learn martial arts or play football. 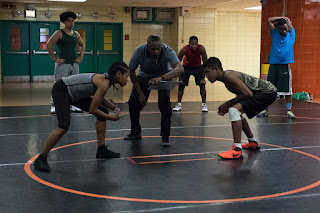 Colman Domingo (Fear the Walking Dead and The Knick) co-stars as Coach Castile, the high school wrestling coach who gives Mo a chance to compete on the boy's team. There appears to be no girls' team or any regulation that says if girls and guys can wrestle each other, which seems odd given that basketball and gymnastics are separated. However, Castile is a warm and strong presence, as well as a progressive one. Unfortunately, Newman doesn't make him the surrogate father for Mo he could have and should have been.

A more intriguing film about a young girl embracing a sport or coming into her own physical presence is the aforementioned T-Rex or even the drama The Fits (2016), starring Royalty Hightower. Hightower was great in that film, but so is Emanuelle here. All of the young actors here do a great job. They exude initially this sexist machismo, faux swagger and chest-thumping, something Mo thinks she needs to exude too. Obviously, by the end, they all learn to drop it and just be kind and forgiving of each other.