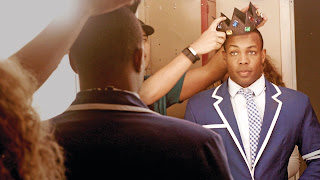 Todrick Hall is a singer-songwriter, a dancer-choreographer and an actor. He's what some would call a triple-threat, as well as a YouTube, social-media celebrity. He's also black and gay. He rose to fame when he was featured on the ninth season of American Idol in 2010. He had worked on Broadway briefly but he became a recording artist. This documentary follows Hall as he prepares and goes on tour with his digital album called Straight Outta Oz, a collection of 16 songs, inspired by the L. Frank Baum book as much as it is an autobiographical exploration of being black and gay from Texas. He describes himself as Katy Perry mixed with Willy Wonka. Director Katherine Fairfax Wright (Call Me Kuchu) follows him on the road, as he's immersed in his creative process, weaving in home videos and interviewing friends and family to show how that description came to be or really how fully-formed he was at a young age and just pushed forward to create his current career through positivity and perseverance.

Wright shadows Hall a month before his tour started in July 2016 and had a camera by his side till the tour's end, which was right before the election of Donald Trump. Aside from the feverish and frantic, backstage antics and conversations, illustrating the struggles and the stresses of putting together an independent musical tour, both financial and otherwise, this movie is also in witness and in reaction to several instances of gun violence that at times personally affected Hall during that fateful summer of 2016. This movie and Hall comment in the moment to things like the Pulse nightclub shooting in Orlando, Florida, as well as the shooting of Philando Castille near Saint Paul, Minnesota. Through Hall, we get an interesting cross-section of someone being both black and gay feeling threatened after these two instances where people of both persuasions separately lost their lives.

At one point in the movie, Hall who was 31 at the time of this tour talks about when he was growing up he didn't have any gay black men as role models or inspirations on TV, in film or music that he could look up to. To a very real extent, that's true. However, he then goes on to say there's no gay black men today other than RuPaul. He positions himself as this singular beacon for people of his generation or younger, and this is where I would push back on Hall. There's plenty of gay black men in entertainment that should be acknowledged. 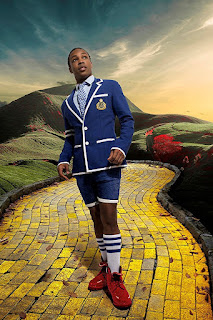 Another triple-threat is Jussie Smollett who came out as gay in 2015 not long after appearing in the hit series Empire. However, he was known to be gay since 2012, thanks to his starring role in The Skinny, an independent film directed by another gay black man, Patrik-Ian Polk. Another music artist, Frank Ocean also came out in 2012 with the release of his album Channel Orange. Another triple-threat who's a bit older is Rahsaan Patterson who came out in the late 90's. Most of these aforementioned guys focus on R&B music like Todrick Hall who does mainly pop and show-tunes. However, there are gay black men doing rap or hip hop music. Bry'Nt who is a rapper and an actor hit the scene in 2011. Le1f is a rapper and dancer who hit the scene in 2012. There are other gay black men who may not be triple-threats but are still men that LGBT youth can look up to, men like Marc Anthony Samuel, the actor on General Hospital, and Karamo Brown, TV host who started on MTV's The Real World: Philadelphia who now is well-known due to his role in Netflix's Queer Eye.

Hall is a good vocalist and is clearly very creative, but his placement of himself as more important or outstanding on the media landscape than he actually might be is a little disconcerting. In this movie, we see Hall is cast to be on Broadway and he has a meeting with Billy Porter, a fellow gay black man who is also a triple-threat and on Broadway. Hall obviously recognizes Porter's star-power, but Porter, however, isn't the only gay black man on Broadway either. There's Colman Domingo, Tituss Burgess and the late Alvin Ailey.

Hall is certainly successful. His album did well on the iTunes charts. His tour apparently had sell-outs or always had huge crowds. What he did was incredible in putting on this tour, creating the music and choreography, as well as the videos to go along with each song. For the most part, Hall is fun, if tiring to watch. He's charming and engaging, hard-working, but I don't know if I would want to see a story about him over Smollett, Ocean or Patterson, or even someone like Alvin Ailey.