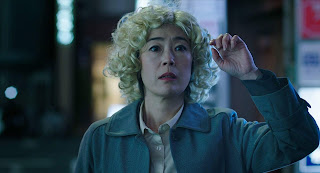 Atsuko Hirayanagi directed a 21-minute, short film called Oh Lucy!, which premiered at the 2014 Cannes Film Festival. It became a hit on the film festival circuit from that point through 2015. This allowed Hirayanagi to turn her short film into a feature. It focuses on a Japanese woman having a bit of a midlife crisis. Ultimately, Hirayanagi's piece is about depression and the desperate acts that one goes through to avoid or escape loneliness. It's also about what people confuse for love and the distances people put on those to whom they're supposed to be close.

Shinobu Terajima stars as Setsuko Kawashima, a middle-aged office worker in Tokyo who is living in a tiny apartment all by herself and who has a smoking issue. She has a sister with whom she's estranged. She does have a niece with whom she speaks but other than that, Setsuko has a pretty isolated existence. She also appears to be pretty disconnected, not affected by much. Even a tragedy right in front of her eyes doesn't move her. She's just going through the everyday motions like going to work without much care or concern. She herself could be suicidal.

Shioli Kutsuna plays Mika Ogawa, the niece to Setsuko who signs up and pays for an English class. She works as a waitress in a quirky restaurant. When Setsuko visits that restaurant one night, Mika tells her that she can't attend the class and she can't get her money back, so she asks her aunt to take the class in her place. Setsuko reluctantly agrees. Mika is a sweet, bubbly presence who genuinely loves her aunt and perhaps has more in common with her aunt than she realizes but has the advantage of being younger and a bit more bold. 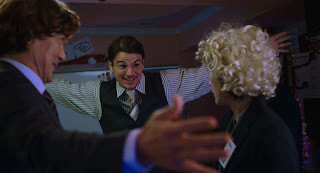 Josh Hartnett (Penny Dreadful and Black Hawk Down) co-stars as John, the teacher of the English class who has some pretty unconventional methods for teaching. First, he insists that only English words be spoken in class. Second, he insists that each person take on an English name. Third, he insists on physical contact in that everyone must hug one another. He's very charming and more affable than Setsuko. He doesn't seem as lonely as her but his affability might be a mask for other deficiencies that could make him seem just as lonely and desperate.

Kaho Minami also co-stars as Ayako, the sister of Setsuko. There is definite tension between the two siblings stemming back to an incident involving infidelity. As a result, Ayako can be very annoying and certainly passive aggressive toward her sister. It's a source of some of the comedy here, a lot of which is quite dry or toned down.

As in The Disaster Artist (2017), Megan Mullally appears in one scene. She's not identified, but Mullally is the kind of actress whose mere presence signals some great comedy ahead. Her comedy here, though brief, is more subtle and limited to quick facial looks. Even though there aren't over-the-top set-pieces, this movie is a better comedy than the recent Blockers, which also follows grown-ups who chase after young people trying to lose their virginity. This movie has Ayako who isn't trying to lose her virginity but the grown-ups chasing her make for more interesting and funnier characters than the ones in Blockers without all the quips or ridiculous lines of dialogue. 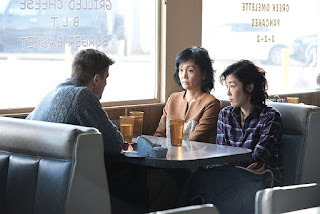 Unlike Blockers, this movie doesn't make obvious or predictable moves. For example, given the title, one might expect a nod to Lucille Ball. Setsuko puts on a wig at one point. That wig could easily have been a redheaded one. There isn't even anyone approaching Desi Arnaz. The only one who could even pass for Latino is a tattoo guy, played by Tre Hale. Yet, the "Ricky" to Setsuko's Lucy here is a businessman named Takeshi Komori, played by Kôji Yakusho. He's not featured much and brings no comedy, but he does bring a compassion and empathy that is much needed in this tender and very touching film.

Not Rated but recommended for mature audiences.
Running Time: 1 hr. and 36 mins.

In select cities, coming soon to DVD and VOD via Film Movement.
For more information, go to the film's website.