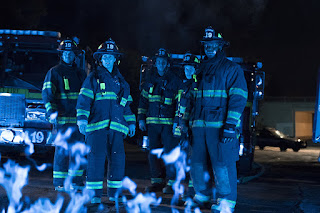 Shonda Rhimes' second-most popular program Scandal is ending this season, so ABC needs something to take its place. What they've done is take a page out of Dick Wolf's handbook. In 2012, Wolf created the NBC series, Chicago Fire about a group of firefighters and paramedics, balancing incredible rescues with their passion-filled, personal lives. The show grew to such a huge success that it spawned two hit spin-offs, a police drama called Chicago PD and a medical drama called Chicago Med. It is a true TV franchise that is making tons of money. It would make sense that Rhimes and ABC would try to replicate it. Instead of going from a firefighter show to a medical drama, ABC is going the reverse direction, from a medical drama to a firefighter show.

Grey's Anatomy began in 2005 and was a smash. It was nominated for several Emmy Awards, including Outstanding Drama Series. It's even won a couple of those awards, as well as a couple of Golden Globes. It's currently in its 14th season. It's one of ABC's longest-running shows ever. It's an obvious spin-off generator. Wolf's show had a firefighter become a doctor. Here, it's the other way round. A doctor becomes a firefighter.

Jason George plays Ben Warren who was introduced in Season 6, back in 2010. He worked as a doctor at Grey Sloan Memorial Hospital, now Ben is a member of the Seattle Fire Department, assigned to Station 19. He's having a tough time adjusting. People call him a rookie despite being in his mid 40's. The idea of a black man in his 40's starting over is a compelling one. I haven't watched this past season or so of Grey's Anatomy, so I'm not sure if the series leaned into that, but it's not given much weight in the first episodes here. 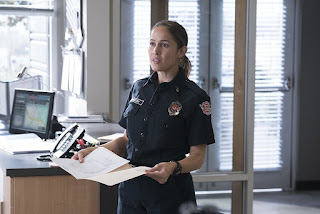 Jaina Lee Ortiz (Rosewood and Scream Queens) stars as Andy Herrera, a tough and really good firefighter at Station 19. She's the daughter of Pruitt Herrera, the current captain of Station 19. When Pruitt is diagnosed with cancer, he steps down and a new captain has to be chosen. Andy tosses her hat in the ring to become the next captain. However, Jack Gibson is in-line to be the next captain because he's the current lieutenant. In order to make her eligible, Pruitt quickly promotes Andy to lieutenant in an obvious show of nepotism that isn't challenged much at all, but at least it is mentioned in the third episode.

The show is about Andy taking a leadership role possibly having to overcome that nepotism and some slight sexism. She seems pretty confident and strong, but she has her doubts and insecurities. Overcoming her own internal struggles is something she'll have to face too. A wrinkle is that Jack is not only her competitor for the captain's job but Jack is also her ex-boyfriend who proposes marriage to her. Meanwhile, Andy is also having sex with Ryan Tanner. Ryan is her childhood friend, next-door neighbor and a police officer who works in the same district as Andy.

This is melodrama and soap opera 101, where Andy has two men, a cop and firefighter, both working with her and both whom she's bedded with so far neither knowing how intimate the other is with her. Yes, it's a love triangle, but unfortunately a rather boring triangle. Besides the two guys being young and attractive, there's nothing much interesting about them. Ryan is a childhood friend and Jack is vying for the same job, so there's potential, which the rest of the season could make interesting, but so far each are quite dull. 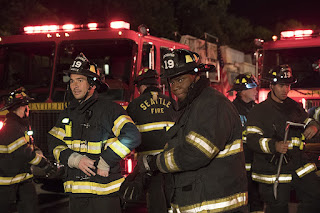 There are four other characters. Maya Bishop is Andy's friend, an Olympic athlete but mostly she's just a talk-to. Victoria Hughes is a young firefighter and paramedic who occasionally acts as a commenter on people's relationships. Dean Miller is the big, buff, black guy, played by Okierete Onaodowan, the Grammy-winning, Broadway star. Dean has issues distancing himself from those he rescues.

Lastly, there's Travis Montgomery, a firefighter and EMT, as well as the station's cook. He's also gay. It's not clear if he chiefly works as a firefighter or EMT. He talks about being married and having a husband who died. He also talks about hooking up with a delivery guy that we never see. Hopefully, the show will explore relationships with him as other Shondaland shows explore same-sex couples by actually showing him hooking up with guys and not just giving it lip-service.

Unfortunately, the look of the show leaves much to be desired. The rescue scenes of the firefighters responding to emergencies so far look atrocious. If you compare this series to Chicago Fire, this series looks even worse. One problem is that this series is set in Seattle but it's filmed in Los Angeles, so it's not able to embrace the city in big, bright wide-shots unlike Chicago Fire, which shoots on the actual streets of Chicago in the daytime without need of worrying of breaking the illusion they're not really there. This isn't the case for this series. It might be okay for Grey's Anatomy because that show is insular, mostly indoors in the hospital, so it doesn't matter if it's actually not filmed in Seattle, but this show has a lot of exteriors or at least its exteriors are vital. Because it's not actually filmed in Seattle, it comes off as particularly inauthentic.