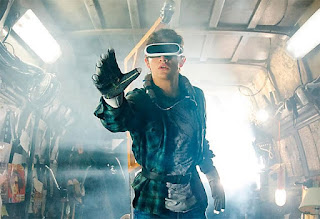 The adaptation of Ernest Cline's book is The Matrix meets Avatar meets Westworld, but, by the end, this movie wants to champion this virtual reality simulation or life online yet at the same time it wants to champion the real, physical world too. Its tactics are a little different than in those aforementioned films. The Matrix was a rejection of that virtual simulation. Westworld was an embrace of that virtual simulation as being just as significant, if not more. The Matrix had a digital simulation, whereas Westworld had a physical simulation. This movie has a digital simulation too, one that too much resembles a video game, not the life-like simulation of The Matrix, but director Steven Spielberg's effort here is for the audience to care just as much about the digital as the physical or real, and I'm not sure he's successful in that effort or achieves a proper balance.

Tye Sheridan (The Tree of Life and Mud) stars as Wade Watts, a teenage boy living in Columbus, Ohio, in 2045. He lives with his aunt and so-called uncle in what's called "The Stacks." The Stacks is a ghetto or trailer park community where the trailers are built on top of each other, using metal and scrap from an adjacent landfill or salvage yard of junk cars. It's meant to signify his utter poverty and desperation.

The Stacks is just one neighborhood. Presumably, Columbus is not totally impoverished and desperate. There are still people who make good money or are wealthy. However, everyone can log onto this online, virtual reality called the Oasis. It's basically a nationwide, if not global, video game that is as big or bigger than Google, but there's little context to the outside world.

We see people walking around with headsets or people in their trailer homes with headsets, but we have no context if it's just as common as Facebook or if it's Pokémon Go, or even how it's paid for. Wade is a teenager who doesn't seem to go to school or have a job. Apparently, he can earn money in the Oasis like bitcoin and use it to buy stuff, but Wade only buys stuff that enhances his game-play but we never see him buying things like food or helping to pay rent, so it's not clear what the value of Oasis money is. There's talk of people having debt, but it's not sure how that debt is related to the Oasis directly or not. 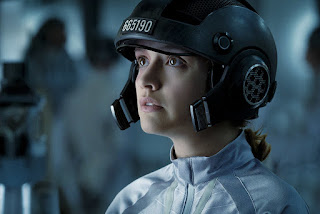 Olivia Cooke (Bates Motel and Me and Earl and the Dying Girl) co-stars as Samantha Cook, a young girl around the same age as Wade who talks about her father being in debt due to health care, which is the only thing that makes sense in this narrative. Her father's plight is linked to this corporation called IOI, a company that acts as a debt collector but with the power to incarcerate people but yet it's not a government body, so it makes no sense how it has this power or authority, but it gives her a motive to want to take down IOI, which is the equivalent to the evil empire from Star Wars.

Ben Mendelsohn who was in Rogue One: A Star Wars Story also co-stars here as Nolan Sorrento doing a version of his character from that Star Wars movie. He's the head of the IOI. Five years ago, after the creator of the Oasis died, it was revealed that ownership of the Oasis will go to the first person who can figure out three puzzles or riddles that are hidden in the video game and find three keys, which unlock a special Easter Egg that will grant the user total control. Nolan wants that Easter Egg and will do anything to get it, even kill people.

The first puzzle seems obvious. A user has to win a high-speed car chase and make it to the finish line. Yet, no one can do it. The employees of IOI are all users whose only purpose is to try to figure out these puzzles. Wade has a group of friends known as the High Five or the "Gunters" or egg-hunters. Wade and his friends are trying to figure out the puzzles before IOI. They do so because they love the Oasis and don't want it falling into the hands of IOI. It's never made clear why that would be worse than what the IOI is doing now.

It's also not clear who is maintaining the Oasis. The IOI isn't technically managing the Oasis, but the IOI acts like it does. By the end, it's revealed that there was someone else managing or overseeing the Oasis but who chose not to intervene when obvious shenanigans are happening and people are obviously being taken advantage of. It's not like the management of Westworld who monitors everything. 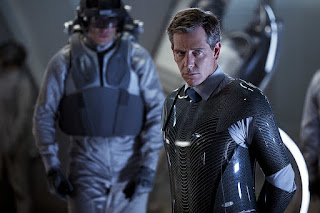 At one point, Samantha is captured in the real-world and forced to do labor in the Oasis. The IOI captures her and basically turns her into a slave, claiming that she's in debt. Again, she's around the same age as Wade, a teenager, so it's not clear how she got the debt or what for, but the management of the Oasis would be aware of this but yet allow her and many others to be enslaved. If that's the stance of the Oasis with enslaving people, what about other crimes? What if Samantha was raped or her avatar was? Would there be no repercussions? Logically, a woman could just take off her headset if something like that happened, but when the IOI enslave Samantha, they literally lock her in a box and attach the headset on her in a way that she can't take it off by herself.

There is something in the Oasis called Planet Doom, which is a war-game section, a shoot-em-up area where people go to commit acts of violence. That's fine, but there's a night club called the Distracted Globe where IOI employees enter and start shooting people. Technically, no one is actually killed, only their avatars, but, it's unclear what the rules are. Can a person shoot another at any point in any place for no reason? Technically, no one is hurt, but there are special body suits, which allow the person to feel actual pain in real life. However, an avatar being raped could still be considered a violation, but this movie doesn't address that. It's more a celebration of game-play, as well as being an explosion of pop culture references.

From Robert Zemeckis to John Hughes to Stanley Kubrick, plenty of filmmakers and films are referenced here. Spielberg's previous blockbuster films are also referenced. Probably the most subtle reference but still most egregious is the reference to Star Wars. Besides the presence of Mendelsohn himself, there is a plot-point where a young man joins a rebellion after his aunt and uncle are killed. In Star Wars, that young man was Luke Skywalker. Here, the young man is Wade. Yet, when the aunt and uncle died in Star Wars, we felt way more empathy than we do here.

And that is inherently the problem with the whole film here. The movie doesn't make us care about the Oasis, its survival, the avatars in it or whose ownership it should have. By the end, the movie would have its characters brush off the Oasis at least for two days out of the week, but arguably that's not the problem. The problem as presented at the beginning is the rampant poverty in places like the Stacks, which probably contributes to people's usage of the Oasis. Wade and his friends get rich, so they can afford to disengage from the Oasis but it doesn't speak to the deeper issues that maybe drive others to it.