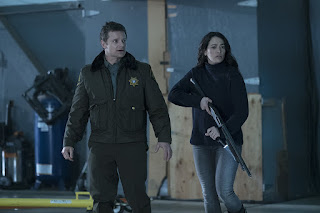 Almost 15 years ago, the USA network scored three Emmy nominations, including Outstanding Miniseries for The 4400 (2004). It ran for four seasons because it was so successful and so well done. It had an intriguing mystery created by Scott Peters (The Outer Limits) and René Echevarria (Star Trek: The Next Generation). That mystery involved a group of people appearing out of nowhere on a beach in the northwest. In fact, there were 4400 of those people, thus the title of that series. Spoiler alert! Those 4400 people were all time-travelers and their reason for being there was to change history knowingly or not and ultimately save the human race. That mystery becomes the mystery here, but it's so far not coming across as intriguing.

Peters and Echevarria gave each of those 4400 a special power. It was like the X-Men but with a group of people who weren't born with powers but were granted these powers suddenly. Each episode of The 4400 dealt with one of those 4400 realizing his or her power, as well as the reality of being in a new time period. At the core of it though was a story of a mother and daughter, as well as a father-and-son relationship. The mother is a single mother and the father is a single father. This series echoes those dynamics and relationships, but it's not giving them the due they deserve.

Steve Zahn (Captain Fantastic and Dallas Buyers Club) stars as Jude Ellis, the sheriff of Port Canaan, Oregon. Canaan is a name for the "Promised Land," salvation and liberation for a group of displaced people. Canaan could seem like an on-the-nose name for this series but still appropriate. However, Jude is the aforementioned single father. Yet, we're not introduced to Jude's son until the second episode. He doesn't become consequential until the fourth and only as a way of keeping Jude in this narrative when his position is relatively low. The father in The 4400 was Tom Baldwin and his son was Kyle. Tom was crucial and integral to the plot, the opposite of what Jude is, so Tom and Kyle's relationship and Tom's bond were firmly established in its first episode. Here, Jude is just a pawn rather than an integral component in solving the mystery.

Natalie Martinez (Under the Dome and CSI: NY) also stars as Reece, one of the time-travelers. She comes from the year 2187 where she was a special agent or special forces operative in what feels like a dictatorship or authoritarian government. That government is run by a genetically-engineered species known as Apex. Apex are humans who have been genetically-engineered to have super strength and super agility, as well as other abilities like super-hearing and language. Apex have taken over and in fact are exterminating regular humans in a genocidal way. Reece is the aforementioned single mother and her bond with her adopted child is firmly established. Her child is a regular human whom she saves, which angers those in her government, so she goes on the run. 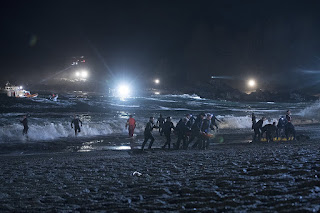 She might be the only Apex on the run, but there are plenty of humans on the run. The humans have found a way to travel through time to escape the genocide. It's not dissimilar from The Terminator (1984), which portends a post-apocalyptic future where humans are under genocide and use time-travel to try to change it. The difference is that James Cameron's 1984 film had robots killing humans with guns and bombs. Here, the Apex kill humans with a virus or biological weapons.

This series is topical and relevant to today because it has a similar road to navigate in how people in present-day should react or treat these time-travelers. It's not 4400. It's 47 but more may be there in secret, but the series refers to the travelers as refugees. In real-life, the same issue of how Americans should react or treat non-Americans trying to come here is an issue that the United States is currently facing. This series could clearly be an allegory to Syrian refugees or Mexican immigrants or any number of real-life parallels.

The 4400 was more a thinking man's, science-fiction series. There were some action in it for sure, but Peters and Echevarria, given their background, were more concerned with exploring their sci-fi ideas intellectually.  The two creators of this series, Dan Dworkin and Jay Beattie, don't have that concern. Their concern is more about being the next 24 but with a time-travel angle to it.

Dworkin and Beattie also could aspire to be like a TV series version of The Terminator but not with robots, but as mentioned with this immigration aspect. This could be the basis for something incredible depending on where they take it. So far, the show is just a chase series and setting up chess pieces. We see Reece running and killing her way through each episode but it's not been much more than that.