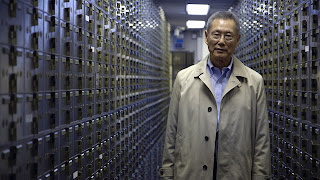 Nominated at the 90th Academy Awards for Best Documentary Feature, this movie premiered at the 2016 Toronto International Film Festival. It hit theaters last year before airing on PBS as part of the network's Frontline series. It was directed by Steve James, one of the most acclaimed documentary filmmakers whose signature work is Hoop Dreams (1994). This film is far removed from the sports world, but like a lot of his work, this film does deal with race, as well as related socioeconomic issues. This time, James concerns himself with the fallout of the 2008 financial crisis where major and huge banking institutions defrauded and gambled with millions. Most of those banks are located on Wall Street in New York City, but none of those banks have been prosecuted or indicted. There's one exception but you'd be hard-pressed to find anyone who can make the argument that this one exception deserved the prosecution it did get while Goldman Sachs and others didn't have to go to court in this way at all.

Thomas Sung is the founder of Abacus Federal Savings Bank, established in 1984 in Chinatown, Manhattan. Sung was born in 1935 and moved to the United States at age 18 to attend law school but saw discrimination against the Chinese by NYC banks, so he decided to open his own to cater specifically to the Chinese population there. He has a wife and three daughters. One daughter became a lawyer and the other two worked for his bank.

After the 2008 financial crisis, it was discovered that something similar was going on at Abacus. In late 2009, a loan officer and a couple of others were revealed to be committing mortgage fraud and money laundering. In May 2012, the New York District Attorney, Cy Vance issued indictments against Abacus with the chief question of if these individual bank employees acted alone or did Sung and his daughters know about it and conspired with the loan officers.

Sung and his daughters denied the charges and it's obvious that the filmmaker is on their side. The argument against the government is one of prosecutorial discretion. The fact of the matter is that the district attorney or any prosecutor does not go after everyone who breaks the law with the same fervor, so the question is why did Vance go after Abacus with all this fervor as to go to trial. Vance could have settled out of court or slapped Abacus with a fine or fee, but instead he took it to trial. Why do that, especially when the damages were negligible? The grievance was with selling bad mortgages to Fannie Mae but reportedly the loss of money was practically nothing, so again why do this trial? 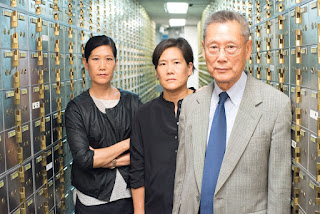 There is some suggestion of a racial component. The filmmaker doesn't really lay out the history of discrimination that the Chinese have faced to put it in a broader context. That suggestion is quickly brushed aside. The real reason might simply be that Abacus was an easy target, one that the district attorney could punish, given no punishment could be leveled against real culprits like Goldman Sachs or Morgan Stanley.

The movie does also reveal some criticism of the Chinese community as a criticism against many immigrant communities. There are some comments about how immigrant culture regards money and gifts and how there is this persistent, old-world idea of not needing a paper trail or records, especially when family is involved. The movie doesn't distinguish if this old-world idea truly is from the old-world or if it was the result of discriminatory practices. It does feel like a deep-rooted cultural issue that contributed to the problem here, but whether it warranted this trial is another issue and not the more-pressing issue here.

Not Rated but for general audiences.
Running Time: 1 hr. and 30 mins.