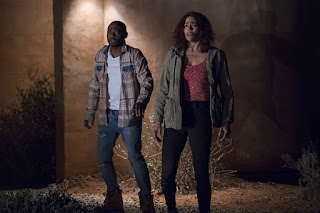 The third and final season of John Ridley's American Crime did a better job of exploring the issue of human trafficking and modern-day slavery than this piece of sheer schlock. This movie, written and directed by Deon Taylor, makes the perpetrators the worst kind of stereotype, the kind of bad guy you could see from miles away, the most obvious evil. In reality, a person who perpetrates human trafficking doesn't look like a tattooed, biker boy in leather with a racist and clearly sexist face, as is the case in this film, which takes place in California. Recent cases of human trafficking have had soccer coaches and petite actresses like Allison Mack as the perpetrators, people who seem so innocent and whom you'd never suspect.

Yet, Taylor frames the story in a way that paints a highly unlikely scenario that is no where near representational of how human trafficking happens as widely as it does and who its victims really are. The movie paints the picture that a middle-class to upper middle-class couple or the women therein could be potential targets for human trafficking. These well-off to wealthy women could be in a store or be in their mountainside home and all of a sudden be abducted, injected with a drug to knock them out and then whisked off in the back of a tractor-trailer. I understand that Taylor frames it this way because it's more dramatic, but Taylor seems intent to shine a light on this issue, but he does such a disservice to it at the same time.

Paula Patton (Mission: Impossible - Ghost Protocol and Precious) stars as Brea, a journalist at a newspaper in Sacramento. She gets into an argument with her boss about how she writes stories or the types of stories she wants to do, which makes no sense. The argument seems to be over style, but she grandstands about the age-old debate of news-sensationalism versus more comprehensive and deep-diving journalism. It's a debate that is had in any movie about a news journalist. It's a debate that's not done any better here than in Spotlight (2015), but the debate is one of no consequence in the film as not to matter. What does matter are the numerous shots of Patton's partially naked body, particularly her cleavage.

Omar Epps (Love & Basketball and Higher Learning) co-stars as John, her boyfriend and potential fiancé. For her birthday, John decides to give Brea a rebuilt, 1969 hot rod that he rebuilt himself because he's a mechanic. He also decides to take her on a road trip into the mountains to a secluded house that's rented out to celebrities and is nothing but luxurious. John is nervous about proposing to Brea but he absolutely loves her. 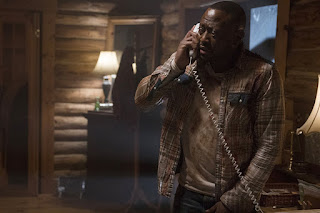 On the drive up to the house, Brea and John stop at a gas station. There, they're accosted by biker boys. A woman who's with them has a weird encounter with Brea in the bathroom. When Brea and John get to the house, Brea learns that the woman has hidden a satellite phone with incriminating evidence about the human trafficking in her purse. The biker boys show up with guns and lay siege on the house who want the satellite phone back.

The biker boys are revealed to be in league with the local sheriff, played by Missi Pyle (Gone Girl and The Artist). If that's true, it makes no sense why the biker boys would lay siege on the house. Why not just send the sheriff to retrieve the phone who could have just flashed her badge and ordered Brea to give back the phone instead of having the biker boys shoot up the place?

At the end, Brea gets kidnapped and put in a pile with other women and girls who are victims of human trafficking. The implication is that these women are going to be shipped off out of the state or country and then sold into sex slavery. Brea and the girls are drugged into a near catatonic state, similar to what the accusers of Bill Cosby said he did. I'm not arguing that things like that don't happen. The Elizabeth Smart case is of course a prime example, but when it comes to human trafficking in general, this movie isn't representational. 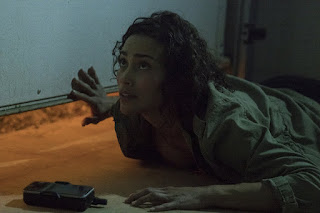 Brea is an American who is in her late 30's or early 40's. Most of the victims of human trafficking or sex trafficking are immigrants and younger, if often underage. The majority perhaps aren't drugged in the way depicted here. Many are lured or manipulated because they're undocumented, homeless, highly impoverished, an addict or marginalized for some reason like homophobia. This movie doesn't care about those societal reasons that create or feed the problem. It cares about being more of an exploitation flick closer to I Spit on Your Grave (1978) or that Kurt Russell film Breakdown (1997). Yet, it's no where near as shocking or as fun as those films.

Rated R for violent and disturbing material, language, some drug use and sexual content.
Running Time: 1 hr. and 36 mins.