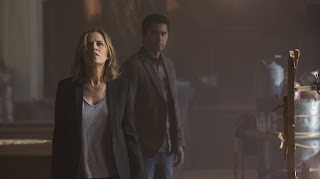 This series is meant to be a prequel to the hit AMC series The Walking Dead. It's meant to show how the zombie apocalypse destroyed civilization by killing millions and emptying out cities all across the country and possibly the world. The first episode of The Walking Dead showed civilization in Atlanta prior to the apocalypse, but it skipped over months of time to show Atlanta after everything had gone to Hell. This program wants to go back and depict that process of everything going to Hell, which could have been interesting depending on how the makers decided to do it.

Written by Dave Erickson and Robert Kirkman, the way they decided to do it was by basically mimicking the original series. The first AMC program focused on a family on the run who bands together with other survivors to hide out wherever they can and stay safe from the newly-found monsters that eat people as cannibals. This new AMC program pretty much follows the exact same path.

Cliff Curtis (Whale Rider and Training Day) stars as Travis Manawa, an English teacher in Los Angeles who is currently juggling two families. He's currently involved with Madison Clark, played by Kim Dickens (Deadwood and Friday Night Lights), a guidance counselor at the same school as Travis. She has two teenage children. Nick, played by Frank Dillane, is her teenage, drug-addict son, and Alicia, played by Alycia Debnam-Carey, is her teenage, smart-ass daughter. Yet, this is essentially Travis' step-family. Travis also has an ex-wife named Liza Ortiz, played by Elizabeth Rodriguez (All My Children and Orange is the New Black), and a biological son named Chris, played by Lorenzo James Henrie.

It's always weird to think that in all these series there is no knowledge of zombie movies or any such culture. There is no existence of George A. Romero, so behavior or the supernatural phenomenon observed is never recognized, or discussed in those terms. Erickson and Kirkman also continually prefer to keep the story isolated or insulated in other ways.

For example, none of the protagonists are first responders like the protagonist in the original series, but in that case it didn't matter because the original series skipped over the apocalypse. Watching someone on the front lines of an apocalypse or outbreak like a cop or a national guard would have been very exciting. Erickson and Kirkman might have been discouraged by the recent FX series The Strain, which does a similar thing.

The Strain is about a CDC scientist who responds to an outbreak, which turns people into zombie-like monsters, and we follow that scientist as he tries to fight it. Back in the first season of The Walking Dead, one episode had a CDC scientist pop-up, and that episode was apparently all the science either of Kirkman's shows wanted to give. That scientist was never seen again.

One thing I was always curious about was how the government was dealing with this outbreak. What happened to politicians, both local and federal. For example, what happened to the president. I was also curious as to what was happening in cultures and countries outside the United States. This series doesn't seize upon the opportunity to expand the narrative in that fashion. We're going to be stuck with Travis' families.

The first three episodes were directed by Oscar-winner Adam Davidson, and his initial pacing is extremely slow. It's not until Episode 3 that the show feels like it's working with any kind of groove or rhythm, but the limitations of the characters are felt immediately. There's really not much for them to do but wait.

Obviously, the only thing to play is the drama between the two families. Loyalty and trust issues are more than likely going to be factors, but there's no setup for how things get out of control, or how a city like Los Angeles gets to a point where you have something like the image from the original series of miles of abandoned cars in Atlanta and a downtown that's over-run with a hoard of zombies.

The writers of this show have so far not done much to lead us toward that path. Episode 4 seems like it might change that paradigm a bit, but the show is probably going to revel in the melodrama between Travis' family and have major stuff regarding the breakdown of civilization left on the periphery. It may do so in order to drag out the potential of this series to run for several seasons, but it makes these early goings rather lame.