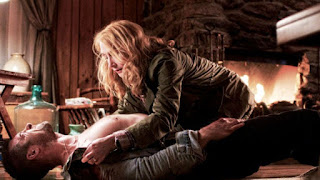 Oscar-nominee Patricia Clarkson (Pieces of April and The Station Agent) stars as Helen Matthews, a medical doctor in Canada who has been recently widowed. She leaves Toronto to go to her and her late husband's cottage basically to clean it out and possibly close it up. The cottage sits on an island a hour or so off the coast of Toronto. You can only get there by boat.

Scott Speedman (Underworld and The Strangers) co-stars as William Grant, a handsome and mysterious, young man who washes ashore the dock of her cottage with a gun-shot wound. He breaks into her house and starts bleeding to death on her floor. Helen is at first scared, but she then nurses him back to health.

Oscar-nominee Tim Roth (Rob Roy and Pulp Fiction) plays Tom, the man responsible for giving William his bullet wound. He's after William for a reason that's kept hidden until the very end or at least until two-thirds through. He's British but very hardened and rough, and certainly bitter and vengeful for a purpose.

There's two problems with this B-movie thriller. One is the character of Tom. The movie doesn't give him enough time to build and really have us feel the relationship between him and William, which we come to know is like a father-son bond. Roth sells it as best he can, but the movie needed more scenes depicting or exploring the dynamic between the two men.

The other problem is the relationship between Helen and William. Presumably, this whole movie takes place over the course of only two or three days. The first day is Helen all by herself. The second day introduces William and the danger he brings and in little time after that she's kissing him. By the third day, we're led to believe there's a possible romance between them, and it rings a little false.

It's obvious that he's sexy and attractive. It's even hinted that William even looks like a younger version of Helen's husband. It's even hinted that William reminds Helen of her late spouse in other ways, but the arc of their romance happens too fast. Understandably, tense and life-or-death situations do breed quick romances, but I felt more development was needed. I felt like they remained strangers from beginning to end.

Written and directed by Ruba Nadda, the movie is more concerned with following this woman as she deals with the death of the man she loved, and how that's contrasted with other people dealing with death of loved ones. A lot of that gets lost in the middle of the movie. Nadda made a previous film with Clarkson called Cairo Time, which does a far better job of developing relationships. This effort is a bit slight and doesn't feel like it comes full circle.

Three Stars out of Five.
Not Rated but contains language and violence.
Running Time: 1 hr. and 31 mins.