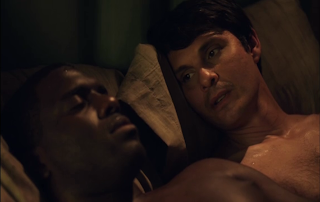 G.A. Hauser is an author of books about male, same-sex romances. Despite being a woman, there is never even a trace of femininity in her gay men. They are all what some might classify as straight-acting in that most conceal or don't openly discuss their homosexuality.

Davon Williams stars as David Harris, the gay, black cop in question. He's called to what is the start of a serial killer's crime spree. David is a big, buff guy but the crime scene certainly affects him. He seems to be a bit sensitive inside but maintains a strong toughness on the outside.

Directed by Hauser herself, what's noticeable is that we never actually see the crime scene or the presumably, mutilated bodies. We see David's reactions to them, but we never see the murders or murder-victims themselves. This could be due to one of two reasons.

One reason could be that Hauser didn't have the budget. The other reason could be that Hauser was simply trying to depict this story solely from David's point-of-view, a cop who doesn't get involved in the actual investigation. He's merely the cop on the periphery or who guards the door. That could have been an excellent point-of-view to take, but Hauser switches things.

Jesse Seann Atkinson co-stars as Robert Taylor, a FBI agent from Virginia who is brought into the investigation to find the serial killer. Robert is nicknamed "the psychic." He explains that he doesn't have supernatural abilities, but because he excels in psychology and behavioral analysis, he can tell what people are thinking or what they're going to do. He's basically extremely good at reading body language and profiling.

This makes him very confident, a bit cocky, as well as have impeccable gaydar. He realizes immediately that David is homosexual. Robert then wastes no time hitting on David and leading him into bed. At that point, the point-of-view switches to Robert's.

Yet, even after the point-of-view switches, what Hauser chooses to show is still just as limited. We still don't see the murders or the murdered victims. Maybe Hauser is squeamish about showing gore and violence but not so about referencing it.

Supposedly, the serial killer who predominantly targets Asian men has murdered 20 victims in 20 days in 2 different cities. Los Angeles would presumably be the third, and his method of killing isn't even really revealed until the end of this movie. There are dozens of victims, a lot of them dismembered, and we don't feel the threat at all. There are plenty of scenes of Robert with his fellow FBI agents talking abut the crimes, but all the crimes feel like they're happening on another planet.

There is a sense of urgency from Robert. He also keeps walking into danger where his life is continually threatened and stupidly so, but still there is a distance, which conveys an equal sense of nothing occurring at all. Supposedly, the killer strangles a family of three, including a child, and it's brushed over almost as nothing. Given that this film comes in the wake of Nighcrawler, there is also a surprising lack of media presence.

Subsequent scenes feature the two in Robert's apartment spending time together. Yet, there isn't much depth. We never learn about David's life, if he has family or even what his apartment looks like. His characterization is practically non-existent. He's just a gay, black cop. I suppose if there's any arc to David, it's him allowing for public displays of affection.

Three Stars out of Five.
Not Rated but contains full-frontal nudity.
Running Time: 1 hr. and 34 mins.