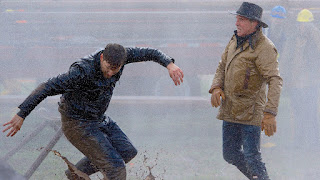 Writers Josh Pate and Rodes Fishburne, thought they were crafting a really exciting, inciting incident, and maybe on paper it was. Maybe it was the way director Jonas Pate decided to stage it, but the opening scene where we see two of the main characters get into a car accident, where a truck flips over several times, sending washing machines flying all over a field, and the two characters walk away without a scratch, was pretty ridiculous. As I was watching it, I was in disbelief, again not because it was exciting, but, because it looked so stupid.

Chace Crawford (Gossipi Girl) stars as Billy LeFever. He and his wife, Cody LeFever, played by Rebecca Rittenhouse (Red Band Society), have loaded up their truck with washing machines and they're going to start their own laundry business. All of that is derailed when they have the aforementioned, car accident and they don't have insurance to cover it. They're traveling through North Dakota at the time, near a town called Patchwork. They decide to get jobs there and save money to get back on their feet.

Cody gets a job at a pharmacy, as she demonstrates knowledge in chemistry and whatnot. Billy gets a job working for the big-time, oil company that's drilling in the area. Once he gets the job, he gets wind of the family that's running it and the problems they have.

Don Johnson (Miami Vice and Nash Bridges) co-stars as Hap Briggs, a rich, slimy oilman who of course wants to be even richer. He's married, for the second time, to a woman who is not the mother of his child. She's Darla Briggs, played by Amber Valletta (Revenge), and she's very Lady Macbeth-ish. She's not advocating murder, but she is very conniving or in the least ambitious to grow the oil company. The way she looks she's almost comparable to Robin Wright in House of Cards but practically she's the Madeleine Stowe from Revenge-equivalent here.

Yet, Johnson is not the equivalent of Henry Czerny from Revenge and certainly not comparable to Kevin Spacey from House of Cards. In fact, Spacey's character and Johnson here stand somewhat far apart. The best example is at the end of the first episode. Hap and Darla want to expand the oil drilling into land near a Native American reservation. Through happenstance and a bit of pratfall, namely another ridiculous car accident, Billy and Cody are able to acquire the land. They then make Hap and Darla have to bargain for it, putting them in business with one another. If this were House of Cards, Spacey's character of Frank Underwood would have found a way to cut the LeFevers off at the knees or backstab them in someway. Here, Hap ends up respecting Billy and liking him.

Of course, this could all change in future episodes, but the real drama or conflict of this series looks like it's going to come from Hap's son, Wick Briggs, played by Scott Michael Foster (Greek and Californication) who continues his streak of playing annoying characters. Here, he's clearly playing up the role of soap-opera villain. The performance isn't that great or interesting, as one would hope for a soap opera villain. Pate and Fishburne's writing for him doesn't help much either.

This series essentially replaces Revenge, which ended its run on the same network on the same night last season. That was a soap opera that took itself a bit more seriously. This series with its ridiculous, car accidents and not so great acting shows it's not taking things all that seriously. Sadly, it's not like Empire either where it's campy enough to be fun.