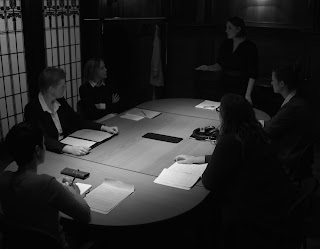 There have been quite a few remakes or homages to the classic film 12 Angry Men (1957). The most recent was an episode of Inside Amy Schumer, which instead of being a searing look at the jury process as it crosses the line with prejudice, bias and bigotry, while also exposing American cultural and socioeconomic issues, the episode digs into sexism.

This movie, written and directed by Sridhar M. Reddy, isn't a spoof, and despite its title doesn't make any distinctions about womanhood. It simply has half the characters and only two-thirds of the time.

Reddy presents the movie in a 4:3 aspect ratio and in black-and-white. Whether she shot the film in this format is unknown, but she presents it in this format, much like Inside Amy Schumer, obviously to invoke the look and feel of the original film. Even though Reddy's story has half the number of cast members, it still has the same dynamics and character beats as in the movie.

The original film, written by Reginald Rose, had twelve jurors who weren't given names. They were only given numbers. Reddy does the same, except with only six. In the original film, they were given a murder case to deliberate. We aren't shown any of the trial. The story instead begins in the jury room with all the jurors needing to vote guilty or not guilty for the accused murderer.

This movie follows the same formula. Alexandra Bennett stars as Juror 4 who is the Henry Fonda-equivalent, and, Fawzia Mirza co-stars as Juror 3, the Lee J. Cobb-equivalent. Again, the same dynamics and character beats play out here as in the 1957 film, the way in which the reversals happen echo or ape the 1957 film almost exactly.

There is one key and significant difference. The case that the jury of six women has to deliberate isn't to exonerate an innocent man. It's to exonerate a man whom there is no doubt committed a murder. In fact, the case in question is a fictionalized version of a real-life case that made a lot of news a couple of years ago.

On February 26, 2012, George Zimmerman at age 28 shot and killed Trayvon Martin at age 17. Zimmerman claimed he acted in self-defense. Many in opposition claimed he scared and provoked the unarmed, black teenager. Many believed Zimmerman was the instigator and should have been punished for it. Except, Zimmerman's trial resulted in him walking away scot-free. The incident, the process and aftermath caused a lot of protests and debates about the specific, Florida law that allowed Zimmerman to walk.

That Florida law is referred to as the "Stand Your Ground" law. In some states, it's referred to as the Castle law. In those states, the Castle law makes sense as it applies to someone using deadly force to protect his home from invaders. The Stand-Your-Ground law applies to someone using deadly force to protect himself outside the home on the street or in a public space. Those against the law claim that it's disproportionately applied so that black people don't benefit, and typically, if not always, leaves black people on the short end of the stick.

It's the Florida law and this murder case that the six jurors in this movie argue. Of course, the names, George Zimmerman and Trayvon Martin, are never spoken. The state of Florida is never identified either. It's all speculative, but the details otherwise about everything else are specific enough that it could be no other case on Earth or at least in the United States.

Unfortunately, the goal of Reddy's movie is to land on the same verdict as the jurors of the Zimmerman case, of which there were six too. Therefore, the goal of Reddy's movie is to mount a defense for the Stand-Your-Ground law, which is in real-life where Zimmerman's jurors ended up. The problem is that it flies in the face of the original film and is rather offensive to the original's spirit.

At the same time, the arguments that Juror 4 makes aren't convincing. She's the one defending the Zimmerman-like character, referred to as "the watchmen," which is itself a reference to the fact that Zimmerman was part of the neighborhood watch, but her arguments aren't thoroughly convincing.

Bennett attempts to exude the same gravitas as Fonda, but she can't succeed because she isn't fighting against unjust bias or racism. She's fighting for an admittedly, ugly and zealous law and an admittedly, overly zealous man who, no matter what, killed a child. She will never have the moral equivalence that Fonda did. Fonda's character was all about saving a child's life and reputation, not condemning that child to death.

What's truly terrible is that even though Juror 4's arguments aren't convincing, all the other jurors capitulate as if they were. Juror 4 makes all these pronouncements about what a jury is supposed to do as if her statements are gospel and they're not. She apparently knows nothing about jury nullification. Yet, all the other jurors go along. That's what's most offensive, and what's truly baffling is that Juror 3 even delivers a heartbreaking speech at the end, which seems to cement her position, but she capitulates too, and it makes no sense.

One Star out of Five.
Not Rated but for mature audiences.
Running Time: 1 hr. and 10 mins.
Reviewed for Portland Film Festival.
For more information, go to http://portlandfilmfestival.com/