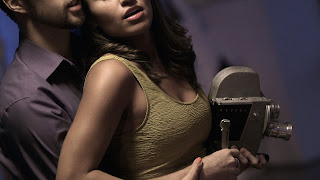 This movie is presumably a documentary, but it has the same authenticity problems as Catfish and Exit Through the Gift Shop when they premiered at the 2010 Sundance Film Festival. Both were presented as nonfiction but many questioned if it were all or mostly fiction. This movie, directed by Matt Heron, has the same issues. Is it real or all fake? It's not aided by the fact that everyone involved are actors. Yet, even if it were a true documentary, it fails to tell a story, one that is complete or engaging. It is perhaps titillating but not much more than that.

What we gather is that dozens of actors are auditioning for a movie. The movie involves a girl meeting a guy and their relationship over the course of a few weeks. There are eight scenes between the two characters that the actors have to perform in totality. We see all those scenes with all the various actors and as the scenes go along, actors are eliminated until it's down to just one pair who will win the roles.

Instead of seeing each actor perform each scene from beginning to end, we see each scene and as the scene plays out, the various actors are swapped in and out. It's reminiscent of Todd Solondz's Palindromes but on steroids. It's not like we see the scenes stop so the actors can be replaced. The swaps happen in editing, almost by magic. The two characters will be talking continuously but then suddenly we see different actors as either the guy or girl, and it's rather seamless. However, it is noticeable.

The swaps happen every few seconds, so if this is an audition, we're not given enough time to evaluate the performances and get a feeling of which actors are better than the other. Besides being different actors, there is a sameness to them all that blurs together through this swapping process. In fact, if one is intent to try to evaluate the performances, the fast swapping process hinders or distracts.

In between the eight scenes depicting this guy-girl relationship, there are more documentary-like moments where the actors are interviewed. The actors comment on what they just did and the process. It's basically actors on acting. Because almost all of the eight scenes result in the two characters having sex, the actors comment on the portrayal of that sex, the awkwardness of it. There's nothing revelatory here, especially if you're one who has listened to DVD commentaries on films and TV shows about or involving sex.

Even if the swapping or rotating-actors process wasn't utilized, it would still be difficult to evaluate the performances. This is mainly because the scenes aren't written in a way that reveals inner character or has deep expressions of personality. Again, most of the scenes result in the two having sex, so it's mostly just the actors being physical and not all that emotional. It's all about them being flirtatious and cheesy, and not anything of significant depth.

One scene that comes close is a scene involving truth-or-dare and a flipping coin. It was a perfect opportunity for the movie to have a deep expression of personality. Yet, it devolves into something cheesy and inanely cute. In another scene, there's another opportunity when we start to see actors making different choices and take the scene to different places. It could have been a situation like Sliding Doors (1998) where we see the same characters in alternate realities, similar but slightly off.

This would have been tolerable if instead of having the actors in between scenes look for socks to cover genitals, we heard from the director of this movie-within-a-movie and learned what his thoughts were or what he was looking for. Eventually, he does choose two actors out of the dozens, but we never learn why or what was it about these particular two that he liked.

Even right before the final two are chosen, we watch the eighth and final scene, which could be referred to as the breakup scene. We see the remaining four actors perform it. Because the movie continues its swapping style from the beginning, it's still impossible to evaluate or to know what's being evaluated by someone else.

Because the breakup scene is the only scene of them all that has any significant drama, it's a wonder why we had to sit through all those endless scenes of the actors being nothing but flirty and sexual, or why those audition scenes looked like they were filmed as if the movie is in full-production. We should have just had all the actors dig into this one.

The ending is just ridiculous. Heron's point of perhaps examining the audition process is totally lost. It ends on a vile, misogynistic act of violence. If this is supposed to be a metaphor for how actors are treated prior or during production, that too is totally lost.

One Star out of Five.
Not Rated but contains sexual situations and violence.
Running Time: 1 hr. and 28 mins.
Reviewed for the Portland Film Festival.
For more information, go to http://portlandfilmfestival.org/