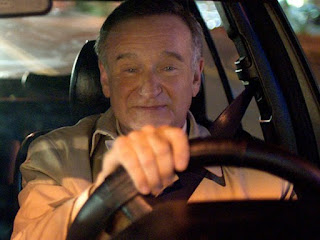 This is the final film featuring Robin Williams who died in August 2014. It once again shows how the Oscar-winning comedian can really turn in great dramatic performances. A lot of it is really in Williams' face. The look in his eyes and on his jowl is one that tells you he is a man who has lived a life of quiet desperation, of repression, of frustration and of withering in middle-class, suburban routine.

Written by Douglas Soesbe, there is a lot that is familiar and that has been played out in numerous, independent and international films. It's now a common narrative in the realm of LGBT films. It works within the trope of an older man falling in love with a younger person who is a prostitute and living in poverty, where sex and drugs are the only reality. In this case, the prostitute is a boy and the older man is secretly gay.

Kathy Baker (Picket Fences and Boston Public) co-stars as Joy Mack, the wife of the older man named Nolan Mack, played by Williams. Nolan is 60 years old, which is most likely her age too. She's probably retired and probably has been with Nolan for half her life, if not all her adult life. Yet, she and Nolan don't have children and in their home they sleep in separate bedrooms.

It's obvious the two don't have any kind of sexual relationship. It seems as if at this point they're just glorified roommates. It's a wonder what their early married life was and how they got to this place. It becomes apparent why Nolan has settled into this routine of roommate and friendship and not true spouse, but it's not clear why Joy would settle.

Many married couples once they become senior citizen perhaps aren't as sexual as young couples are, but it would have been better if Soesbe had done more to indicate the trajectory of how they got to where they are. Did they always sleep in separate beds?

Roberto Aguire plays Leo, the young male prostitute in question. It's a mystery if Leo is developing feelings for Nolan. He becomes a conduit for Nolan to explore a side of himself he never has. Despite being 40 years his junior, Aguire in his face is able to match the look of quiet desperation, as well as a type of repression and frustration.

Soesbe's script doesn't reveal too much about Leo's back story, but playing off tropes about prostitution, one is able to guess or intuit enough. Again, he's just a conduit. The real revelations come with Nolan, but that's where Soesbe's script begins to fall apart. It's difficult to understand Nolan's line of thinking.

I'm not sure I totally got what prompts Nolan to do various things. One night, he's driving home and he almost hits Leo who's crossing the street. Nolan is clearly smitten. He takes Leo to a motel room where he doesn't want to have sex. He just wants to talk or go out on a date, but he pursues this young prostitute as if he's the only gay person on Earth.

Yes, he's an older guy, but he's not stupid. However, Nolan's actions in regard to Leo are supremely stupid. If his goal is to keep his relationship with Leo secret, he shouldn't take Leo to dinner at a huge public restaurant. He also allows his relationship to affect his work in ways that feel stupid or worse contrived.

This is the fifth film from director Dito Montiel. It's a step up from his previous and the first time he's dealt with a story about people older than him. Channing Tatum starred in his first, three films and Tatum was only 25 when they worked together initially. Liam Hemsworth starred in the last film and was only 22. Both Williams and Baker were in their 60's.