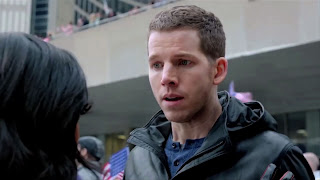 I started my blog "The M Report" on WBOC.com back in 2009. Some time later, I wrote an article explaining why my blog had that title. Long story, short, I titled my blog after the acclaimed and hit film by Steven Spielberg called Minority Report (2002). Spielberg is one of my favorite filmmakers, and that 2002 film remains one of my favorite, science-fiction adventures ever.

When I heard that the FOX network was creating a series, which follows the events of that movie, I was excited and a bit nervous. I was nervous over the fact that unless Spielberg was directing it himself or unless the budget would be substantial, this series would fall short. I was also nervous that it would be a series of homages, superficially, without really getting at the substance of the material, which in all honesty if it did, then the series wouldn't even exist, not in its current form.

Stark Sands (NYC 22 and Generation Kill) stars as Dash, a young man with psychic abilities. He's what's known as a "precog" or he has a precognitive sense. He basically can see the future, and specifically he can see how people will die, if nothing is done to interfere. He's a younger, more anxious version of Peter Boyle's character on The X-Files.

The events of the 2002 film are this TV series' back story. In that film, Dash was one of three precogs who were part of a police organization in a futuristic Washington, DC called Pre-Crime. Pre-Crime used the precogs to arrest murderers before they committed their killings.

The lead detective of Pre-Crime was Captain John Anderton, played by Tom Cruise. By the end of the movie, Captain Anderton figured out there was a metaphysical flaw in the system, as well as a huge moral flaw with locking up people for things they haven't done. This series, adapted by Max Borenstein, disregards all of that, so that it can have this police procedural set in the world established by that movie.

The problem is that it's an obvious cash-grab. The executives at FOX are banking off the name and people's love of the movie, like mine, to get them to watch this program. Directed by Mark Mylod, it mimics the look and the movements of Spielberg in that film, but it never quiet measures up. It's instead a cheap substitute.

FOX already had a futuristic cop show. It was called Almost Human, and what mainly set that 2013 show above this one is the acting. Karl Urban and Michael Ealy are two immensely better actors than Stark Sands. Urban might not actually be a better actor per se, but he's got a lot more charm and sex appeal, as well as magnetic, screen presence than Sands. I haven't seen Sands in his previous two TV shows, but I couldn't go with him here.

As written, Sands is too awkward and twitchy. It might make sense from a narrative stand-point to have him be that way, but it's not compelling if this is the guy whom I have to follow week-to-week on this TV show. In one scene, he has to be convinced to do what we know he's going to do if this show is to continue and not only was he not convincing but it was a waste of a scene.

What saves a lot of the show from being pure dreck is Meagan Good who plays Lara Vega. She essentially has the Tom Cruise role here or maybe more accurately the Steve Harris role, if one is familiar with the movie. She's certainly charming and has immense sex appeal, which Mylod, having directed Entourage, definitely makes sure the audience notices. She's smart, tough and has the right amount of sass that I'd watch just for her.

Wilmer Valderrama plays Will Blake, an ambitious and competitive, fellow detective to Lara. Despite having an amazing body himself, he's mostly just annoying. Same goes for Nick Zano who plays Arthur, the brother to Dash who's also a precog.

The first case that Lara and Dash have to solve is just ridiculous. It's perhaps as ridiculous as "The Balloonman" episode of Gotham, which airs before this show on FOX. This first episode ends also in a silly climax, which makes me think that Borenstein doesn't really take any of this seriously. Spielberg of course had humor in his 2002 film, but Spielberg balanced the comedy with the tragedy better than here.

This show is possibly a futuristic version of Person of Interest. I like its almost Gene Roddenberry vision of the future, but being that it's set in the year 2065, I wonder how it would comment on things like climate change or global warming or ISIS, or are all those things solved?