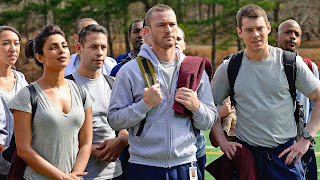 The first episode started off strong and was somewhat interesting, but then went completely off the rails by the end. Written by Joshua Safran (Gossip Girl and Smash), it's commendable that this series is not going to be yet another police procedural and that it's going to take a similar route as How to Get Away with Murder. Yet, the Shonda Rhimes-produced and Peter Nowalk-written thriller balances the insanity a little better and is anchored by a central performance with more gravitas than all of the people here combined.

Priyanka Chopra stars as Alex Parrish, a cadet at the FBI Academy in Quantico, Virginia. She was recruited along with a bunch of others because of her specialized skills. She's going to live at the academy with the other recruits while they all complete their training, both physical and mental.

While we watch this, Safran flash-forwards several months to reveal that Alex is the survivor of a bombing in New York City that goes off in or near Grand Central Terminal. She is immediately put under investigation, as she learns that she is a suspect along with all of her other fellow cadets at the academy.

That, in and of itself, would have been enough to sustain 13 episodes, but Safran doesn't stop there. He has to kick the insanity up even further. Not only does Alex miraculously survive a massive bombing that certainly mimics 9/11 in its depiction of destruction, but Alex is arrested, even more unlikely escapes the FBI and then goes on the run so that she can probably prove her innocence.

It's funny because Brian Jacob Smith guest stars as Eric Packer, one of the cadets who has a shocking secret exposed. Smith was seen recently in the Netflix series Sense8, which introduced eight characters and explored all of their lives in depth. There are about eight characters or so in this show, but instead of throwing so much at us in just the first episode, Sense8 took its time and built to things in progressive ways.

This show doesn't want to build. It instead throws everything up in the air in the first episode. Director Marc Munden can't ever be accused of being dull. Everything moves here in a whirlwind. One barely has a chance to gain one's bearings. The show follows Once Upon a Time, which is a show that doesn't seem interested in ever slowing down, stopping to catch its breath or delving into the characters either. It just wants to pull everyone along from one adventure to the other.

This can be fine for the first season. Once Upon a Time is now in its fifth season and maintaining its momentum has continuously left certain characters in the dust. Hopefully, this series doesn't do that. Right now, it's given us dime-store psychology of all the people involved and swept them up in an over-the-top, action plot, so the audience can just have fun in the twists and turns of that.

Meanwhile, Chopra is a sexy and strong, leading lady to put in a landscape with quite a few sexy and strong women like Kerry Washington and Viola Davis. She's certainly third after Davis and Washington, but she's compelling to watch. The secret exposed about her character was lame and somewhat cliche. Alex has issues with men, which stem to her daddy issues. Chopra, however, seems like she'll be able to overcome the problems with the script.

Note: This show is being reviewed as part of a series of one-episode reviews during premiere week, which for the major TV networks runs from late September to early October